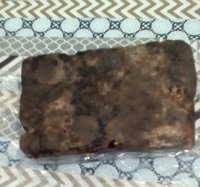 Reposting some info from my introductory thread, because it really ought to go here:

I have gotten myself some really great African Black Soap from this Etsy store:

(If you can’t find it in this store’s catalogue, you can send a PM to Joee (the person running the store) and request it. Tell them Glytch sent you )

(I’m not vegan, nor do I subscribe to aromatherapy or essential oils, but she makes good soap so whatever)

A few notes on this stuff because it deserves attention:

“The main ingredients of traditionally made African black soap include native plants like plantain skins, cocoa pods, shea tree bark, or palm tree leaves.
Once plant matter is collected, it is first sun dried and then roasted until it turns into ash.
The ash is then added to water and various fats like palm oil, coconut oil, shea butter, cocoa butter, and palm kernel oil.
This mixture is then heated and hand-stirred for a least 24 hours until it begins to solidify before it’s scooped out and left to cure for two weeks.

It's amazing for cutting through the oil, and pretty much zaps any acne that does manage to attempt to start. Also makes my skin dewy, clean, but not oily.“ ~DinkyInky, from another forum

“* This stuff usually comes in *bricks*, not *bars*. The difference? A brick is intended to be crumbled for use. Take a small (pea sized or smaller) bit off, mix with a small amount of water to lather up in your warmed up shaving cream bowl (or other warmed stoneware bowl, the warmth is important in opening the pores so they won't clog) until you have a good lather to brush on. Apply as you would shaving cream. If you are in a hurry, crumble a small piece off, rub between wet hands until you get a lather, and apply lather to skin. The important part is that you are applying the lather to the skin, not the soap itself.
* This stuff is hella good if you can source it. It both strips and moisturizes, which is what you want, and the smell is subtle and non-intrusive, so you can wear it with a cologne or deodorant.
* You pay for what you get, most of this sort of thing is hand-crafted these days, and hand-crafting soap is a very tedious and potentially hazardous task (similar in concept to smithing, if you don't pay attention, you can get yourself hurt, as you are working with lyes). Expect to pay more than you would for your typical bar of Irish Spring.
* While it can do as a shaving cream, properly lathered, in a pinch... it's best used as an aftershave. It'll still be a mile beyond generic Barbasol as far as a shaving cream, but I strongly suspect you're getting something of significantly higher quality. This means it'll look like you are lathering up twice, one with your shaving cream, and once for your rinse. But it'll have the same effect as a traditional liquid aftershave with better effect overall.” ~ShneekeyTheLost, from same forum as Dinky

Some personal notes on this stuff from my latest period of experimentation: It’s powerful, that is fully apparent. It stings a tiny bit on freshly-shaved skin, and it stings significantly on scrubbed skin. If used to scrub, it will exfoliate with extreme effectiveness - I think it has small particles of carbon ash in it. It does indeed strip oil very effectively, but it somehow doesn’t make my already oily-to-the-point-of-qualifying-to-join-OPEC-face freak out and make a bunch of extra oil, so I’ve noticed a significant drop in acne.

Also, I bought this initially as a face cleanser/aftershave, but being a garbage man in an industrial environment who works long hours all the bloody time, I have found it to be an excellent all-over soap. Strips industrial grime like you wouldn’t believe. It takes two to three vigorous scrubbings with ivory to accomplish the same level of clean-ness as one gentle washing with ABS. I personally don’t use it as an aftershave as suggested by Shneekey. It’s got some soothing and antiseptic properties, but it also has plenty of scrubbing, exfoliating, and slightly harsh, deep-cleaning properties that just don’t work for me in an aftershave. I use it as my main soap now - face and body.

Don’t scrub your face with this stuff and then shave and then use aftershave. You will scream. I sure did.

A gentle wash will do. Your nociceptors will thank you.


As noted above, it comes in 1lb bricks, and it’s a heterogeneous mix. I prefer to take a 1/2 golf-ball-sized chunk and use clean, dry hands to mash, knead, and fold the stuff until it’s more homogeneous.

It does NOT work well as a shaving soap. Just trust me on this one, it fools you into thinking you have a good lather, but the lather vanishes as soon as your brush touches your face, and what you end up with is a sticky, non-lubricant residue. Yech.

Also, word of warning: do not use this after having recently used an Alum Block. Some kind of reaction takes place, and it produced some kind of film that broke apart and felt like wet peeling sunburnt skin. I don’t think it was actual peeling skin, but it was definitely unpleasant.

Similarly, I make sure to rinse extremely thoroughly to remove any residue of this stuff before shaving so there’s no chance of the Alum Block reacting to it after I shave.

From the above link, this stuff costs about $10 for about 1 lb.

I got 14 oz for $9 plus shipping because of how the shipping price brackets work. If you want more from a single order, she’ll have to use a more expensive shipping package.

Thanks for the information on this soap.

Glad to contribute
You must log in or register to reply here.

Getting rid of Eyebrows hair

How much stuff do you use in your shaving ritual? And in what order?
2 3