A salute to the humble Edwin Jagger DE89

I think sometimes the DE89 gets a bad rap. "It's made of crappy pot metal! It's too mild! It's a beginner's razor!" are statements I see too often on B&B. The DE89 was my first razor, and after 10 years, it's still a great razor that fits in my rotation. In fact, of the 50 or so razors I own, it's one of just a few that gets regular use. So I offer my praise to one of the best razors on the market.

- "It's made of crappy pot metal." Yes, the head is made of Zamak which can corrode. About 2 years in, mine did start to corrode on the threads. I'd heard about the world class customer service at EJ, so I contacted them. They asked for a picture, confirmed the corrosion, and OVERNIGHTED a new head FROM ENGLAND to the USA. They didn't have to do that--it probably cost them more than the $30 I spent on the razor in the first place. I'm sure they could have worked with a US distributor and gotten me a new head in a week--but they went above and beyond and earned a loyal customer in me. Also, that second head is now 8 years old and has never shown any signs of corrosion--it looks as good today as it did 8 years ago.

- "It's too mild" Full disclosure, it took me a long time to get shaves with the DE89 compared to my Mach 3 and Fusion carts. But once I got the right angle, pressure, and blade, there's no comparison. This razor rewards people who have the patience to get it just right. I shaved with mine this morning and 4 hours later, my skin is still BBS and I had zero irritation.

"It's a beginner's razor" I don't even know what this means. It can be purchased with everything from cheap handles, up to very nice looking and expensive handles. The head of the DE89 might be the most knocked off head in the industry. People who learn to use it can get excellent shaves. If I hadn't joined B&B, I would probably still be happily using it as my only razor.

So I raise my glass to the humble EJ DE89! Well done, Edwin Jagger--you make a great razor!

I'm a big fan as well. My most enjoyable razor. Smooth and perfect results.

Impressed by your story about the customers service.

I was just on their website seeing what handles they currently offer. There's a great video about the history of the company.

Contributor
I will never be without one in my den.

samasourus said:
I will never be without one in my den.
Click to expand...

There's something to be said for solid performance.

Great report! The EJ is a classic for the reason that it is one very fine razor!! Certainly IMHO.

AZBronco said:
"It's a beginner's razor" I don't even know what this means.
Click to expand...

I have concluded it is easy to use by seasoned DE shavers or beginners so it adapts to many styles. More importantly it is modestly priced so not a great outlay for dipping your toes into using a DE razor.

Invicta said:
I have concluded it is easy to use by seasoned DE shavers or beginners so it adapts to many styles. More importantly it is modestly priced so not a great outlay for dipping your toes into using a DE razor.
Click to expand...

Great point. I think sometimes it comes across as "once you've figured out the DE89, it's time to move on to something else" which isn't necessarily true. It's obviously not the best razor for everyone and everyone is welcome to go down the rabbit hole--I know I did!

An Edwin Jagger DE3D14 is my primary razor, and I keep a spare head, plus a second spare top cap (both available cheaply) in the drawer, in case maintenance is required. So far, I have only had to replace one top cap.

I can see how someone could shave daily with the EJ. But since I shave every 3 days it doesn't really give me the result I want. Now as far as the metal is concerned I am sure the razor will outlast many of us.
T

Concur with the above, works perfect if one shaves every day but once growth gets into the few days plus it's not as effective, but that's an issue a lot of mild, closed comb razors have anyway so not a mark against the DE89 specifically. Was my first ever DE razor but sadly I dropped mine on the bathroom floor and it broke clean at the threads.

Contributor
I keep a Merkur open comb for shifting heavy growth, and have a spare head for that razor too

The company changed the design a few years ago to use brass for the threaded post. That seems to have addressed one of the main points of failure. Nice plating on these, even if the head is zamak. Replacement parts are pretty reasonably priced.

Blades on the sharper end of the spectrum make a big improvement in results. You can also put a shim under the blade. This adds some rigidity and a bit more efficiency. A good daily shaver.

My EJ89 probably gets more use than any other razor in my horde. I have probably used it over 1000 times. It is an old friend.

The pot metal screw thread looks pretty rough, and it's a little loose on the handle, but the rest of the head could pass for new (minus a light scratch or two).

The EJ89's blade exposure and gap is just about perfect for my face. Kind of like Goldilocks... not to aggressive, but not too mild. A perfect medium, I guess. I find it works with most blades from Derby to Feather. The results? Depending on the attention I put into the shave, from DFS to BBS.

I lost my DE89 in my move this past summer, but I've owned one for many years. Unfortunately, the threads have a tendency to degrade over time, but Edwin Jagger has been great about providing a free replacement cap. (The first time it happened I didn't think to contact them and just bought another cap, but it's a very inexpensive purchase.) @Atlantic59 stated above that the post is now brass, and while I know that is true of the very similar Muhle R89, I wasn't aware that Edwin Jagger has made that change. I was going to pick up a new R89, but if the DE89 is now a brass post, I would buy the DE89.

karm said:
The pot metal screw thread looks pretty rough, and it's a little loose on the handle, but the rest of the head could pass for new (minus a light scratch or two).
Click to expand...

If it starts getting a bit wobbly (mine went a bit crunchy eventually), a new top cap will fix it. They're cheap, and come with a free pack of blades. They also supply whole heads for not much more. 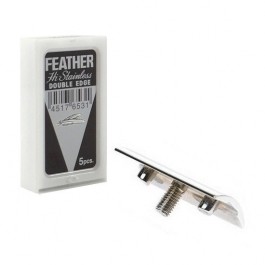 Steve_in_CT said:
@Atlantic59 stated above that the post is now brass, and while I know that is true of the very similar Muhle R89, I wasn't aware that Edwin Jagger has made that change. I was going to pick up a new R89, but if the DE89 is now a brass post, I would buy the DE89.
Click to expand...

I just got the head as a replacement part and put it on my own handle. Come to think of it, it might be safer to say the Muhle R89 head has been updated with the brass post. The geometry and feel of the Muhle R89 and Edwin Jagger DE89 is the same, though.

Contributor
#3 It's a beginner razor
To me, this means that it is not only mild, but inefficient. By beginner, I take it to mean cheap enough to try out, but go back to carts if it doesn't suit you. The fact that so many razors are available for so little means B&B is still relevant to find out which ones deliver the best performance. The fact that so many are based on, or use the head of, the R89 says a lot about it's qualities that suit so many people.

Just not for me, but I can remain objective.

Contributor
I gave my brother a few DE’s when I became more committed to SR shaving. I kept my favourite vintage ones and couldn’t part with the DE89. I have the smooth handle and love the look and feel of it. Used it last week, a fine razor.
You must log in or register to reply here.

M
Which blade is the best for really thin hairs?

Which is RazoRock's mildest Stainless Steel DE head? And other questions, please
2 3