Contributor
TL;DR: I bought a Raven watch - the Solitude model.

I've been looking for a replacement for my Invicta 9403 for a while now. I needed a daily watch that would meet my minimal needs, as outlined in this thread. In the intervening time, my circumstances have changed a bit and I was able to open up the coin purse a little wider, dig a little deeper, and look at watches up to $500. For some, that's not much; for others, that's a ridiculous indulgence; for me, that sits squarely in the middle - more than I need to spend, less than I could spend, but feeling perfectly reasonable for a quality automatic.

Raven is a microbrand, which really appeals to me because I tend to like things on the fringes rather than the mainstream. I certainly wouldn't sneeze at a Seiko or Citizen if it were offered, but when I'm spending my own money, I want something just a little...different.

I did a lot of reading regarding different watches, both contemporary and vintage/used, and identified the Solitude as a great fit for my needs. On the Raven site, I got plenty of info regarding specs and history, but, strangely, no "buy" button. I emailed Steve at Raven and he replied that the Solitude was sold out. A new model, the Solitude II, is in the works, but it would be in a 42.5mm case, which is too big for me.

What a bummer! I mean, good for him, for selling through, but it meant that the watch that would meet my needs for form, function and fringe appeal was now unobtanium, unless I wanted to go to the secondary market. However, Steve emailed back later, saying that he had dug out three final Solitudes: all black dials, with different bezels and treatments. They had been used for photos and might have minor wear, but he would let me have my choice and back the watch with a full warranty. Sold!

As happens with a lot of microbrands, the Solitude uses the venerable NH35 movement from Seiko. It's not a chronograph, but keeps time well enough for most folks, and after wearing this for five days, I'm beginning to suspect that it was regulated. It also shows the date, which is important (to me) for my daily watch.

Movement aside, the Solitude is a step up from the 9403 in every way. The case is well-considered and beautiful; the bezel action has just the right amount of tension and feels solidly incremented, without any back-play; I woke up at 2am the other night to find that the lume is still strong after 3+ hours (though I haven't tested the overall longevity of a "full charge"; the date is easy to read; and the dial is clean, yet unique. I haven't tested the water resistance yet, but I'm quite sure that won't be an issue.

It wears a bit bigger than the 9403, though the case sizes are ostensibly the same. That doesn't bother me at all. It was, however, pretty funny to watch the jeweller having to keep removing links to size the bracelet for my tiny wrist! And speaking of the bracelet, that's the one complaint that I've read. It's nice enough, but people don't like the clasp. I find the clasp to be fine; the issue that I have is that, the first link on each side exposes the inside of the link because my wrist isn't wide enough for the links to be pushed out from the case. A different approach to the interface between the bracelet and the case might have solved this, but (a) it's a modest complaint and (b) those with larger wrists - and that's almost everyone! - will never notice.

So, enough with the words; I know that pictures are demanded, and pictures you shall have. 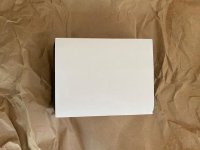 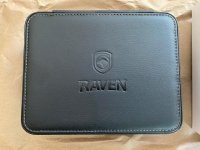 The open case, showing storage for two watches, plus tools and/or whatever else: 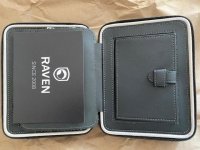 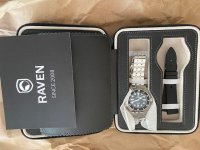 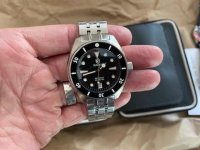 The watch on (before sizing the bracelet): 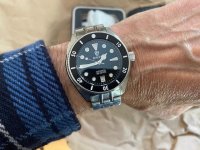 The watch on (after sizing the bracelet): 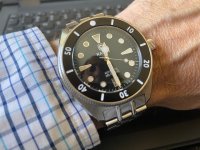 In the near future, I'll see how this looks on a NATO strap. For now, though, I'm happy to have it on. Thanks again to Steve at Raven for making it happen!

Ambassador
That is a BEAUTIFUL looking watch my friend!

FarmerTan said:
That is a BEAUTIFUL looking watch my friend!
Click to expand...

Thank you, kind sir. It definitely seems to punch above its weight. The lume is amazing and it keeps time quite well, even for a humble NH35. I'm quite happy with it.

Cushion case, date at 6, submariner/diver style dial Good looking piece! Decent lume is hard to come by on some smaller brands so it's nice to hear they did well with it.

ylekot said:
Cushion case, date at 6, submariner/diver style dial Good looking piece! Decent lume is hard to come by on some smaller brands so it's nice to hear they did well with it.
Click to expand...

And the date is legible! That's important as my eyes get tired...

FoolishMortal said:
And the date is legible! That's important as my eyes get tired...
Click to expand...

Moderator
Looks great, I do like a diver. But it looks HUGE! I'm stuck at about 41mm max.
How big is it?

nemo said:
Looks great, I do like a diver. But it looks HUGE! I'm stuck at about 41mm max.
How big is it?

It's 40mm, though it seems to wear a bit bigger.

Congrats on your new watch. Enjoy it.

FoolishMortal said:
It's 40mm, though it seems to wear a bit bigger.
Click to expand...

Oh, that's perfect.
You must log in or register to reply here.

In which Tankerjohn gushes about his new White’s Boots…

J
Which Braun should I keep?