I have an Acca Kappa 23mm handle and an Omega 28mm handle in need of new knots. Going with the recommended glue clearance of 1-2mm that would dictate a 22mm and a 26mm knot.

Even though this will be the first time I have tried to set a knot, I don't want to just get a cheapo knot and have to redo it later.
That makes the glue choice simple, 2-part epoxy, which I have been using for decades.

I have ruled out the D01's as I have a Simpson PJ2 in Super Badger, and I want something not quite as dense, with more loft, more scrub, less backbone, and no scritch.

Any thoughts or tips? 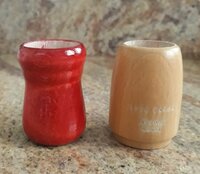 The Acca Kappa is really starting to take shape, and the knot has been ordered. Shavemac 22mm Silvertip 2-Band Fan with 2mm extra loft.
@Rudy Vey says the Shavemac knots tend to run 1mm over and the 22mm should fit nice and snug. I can always open the hole a bit. I also ordered a 26mm for my other handle. Looking forward to seeing the finished brushes with knots installed.

Let us know how the brush works out (PLEASE)!
Last edited: Saturday at 7:11 AM

Let us know how the brush works out (PLEASE)!
Click to expand...