In and have not been tempted. I have a full supply, probably for a couple of years, really.

In and reporting for duty. No temptations, and being in a remote location too far far away to hear the siren call of desirable shaving gear.

Admittedly, I went on a bit of a soap and Simpson-Brush acquisition bender in December in preparation for a long year of buyer discipline in deep space. My exception is a Wolfman razor, which is hopefully the final frontier in razor aquisitions, probably my number will come up in around July. For now I continue to go forth with phasers set to stun.

On duty
Still cleaning the critters ( Tobs samples) off low deck. While Tobs platinum offers a good lather like most Tobs, the scent is not my favorite. Can't even describe it. Good shave 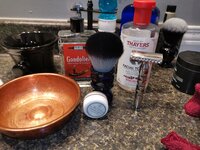 Waiting for my restock to be beamed aboard.

Smooth and Sharp said:
On duty...
Click to expand...

That's an interesting looking bowl, Mr. Scott. Is that Klingon? 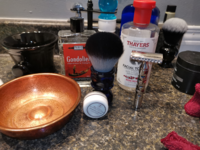 Shh, please don't tell the commander, I got that on Trek bay few months ago.
P.S. feel free to call me Scotty

Decided I needed a change after using the RR Hawk v3A with a Proline for fifteen consecutive shaves. Today's shave and a great one at that was:

This is the last razor I was waiting on from my December purchases. Still waiting on my Kilo of soap.

This is a very mild razor, even more mild than I care for and I like mild razors. I will say that for something inexpensive made in China the build quality and fit and finish are excellent.

It has great balance and feels good in the hand, very similar to a gen 1 Phaser set to stun without the recoil.

Had a nice bbs shave but it took a lot of work on the cleanup passes. Rating today's shave the same as a gen 1 Phaser, 6/10. 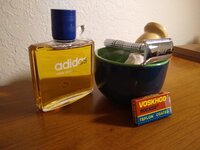 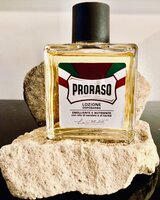 This was one of my final 2020 purchases, and I’m really pleased with it. I really like the Proraso Blue cream and the Green splash (if the green cream smelled like the splash it would be a favorite) but for some reason was hesitant to try the Sandalwood. Glad I did, I really enjoy it! Looking forward to trying the cream along with it on my next shave!!

Still in! No temptations yet. Enjoying Roulette for my shaves.

Tonight's twisted episode: The Devil in the Dark.

The ship is called to the class H planet Janus VI, described as "an ugly planet... reddish-brown, with a thick turbulent layer of clouds, slowly rotating." Further notes describe it as "hostile looking, with a boiling atmosphere." 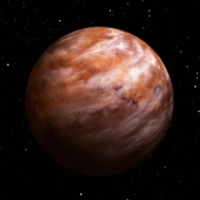 The mining colony on Janus VI is experiencing many unexplained crew casualties as they drill deeper beneath the planet surface. The mysterious alien attacker eludes the miners trying to track it down. This has halted all mining of critical minerals needed by the Federation.

The captain and first officer locate the creature and confront it, wounding it with phaser fire. The creature seems to be a silicon-based lifeform, vaguely resembling a shag rug, that can tunnel through solid rock. 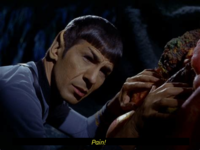 After the Vulcan mind mild, the creature amazingly seems to have learned our language and intentions; it then leaves a strange message etched into solid rock. 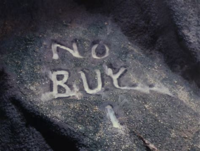 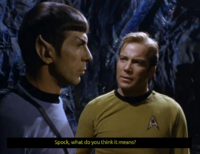 Spock reveals the creature is known as a Horta, and is the last of its kind. It is a mother tending to hundreds of eggs from which the new generation of Horta will be hatched. The miners destroyed many eggs and this is why the Horta attacked them and drove them away. 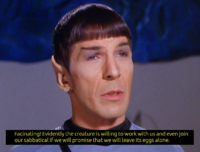 After some improvised medicine from the good doctor, the creature's wounds are tended to. It is willing to cooperate with the miners and soon a new generation of Horta populates the lower levels of the mines. The creatures' tunneling will enable to miners to extract the vital minerals they seek.

Our ship's mission is to explore strange new worlds. To seek out new life and new civilizations. We often fear what we don't understand. In this episode we have found new life in a very unexpected way, and reached an understanding with it. This will be the first known inter-species sabbatical.
Last edited: Jan 10, 2021
C

I am pretty sure that I do not want to be on the bad side of a wounded Horta. My resupply is complete and I believe that I have precluded any temptation with a selection of soaps and aftershave that will provide sufficient variety. I did get the big slab of Cella divided into a wooden bowl that came with TOBS and a jar that came with AOS peppermint. The remainder is sealed in a cool closet. First impression after a use is that this is going to be a mainstay soap. I will need to get a better feel for how much water to use but first result was nice. The Horta can be assured that I can proceed with the NO BUY instruction from here. Good luck to all.

My restock should arrive next week, and I'll need to declare my exception even though the window is still open, I buy my witch hazel in 1 litre bottles at a soapmaking supply store; I dropped in yesterday and they were out of stock. It's such a good deal I'll wait for when it comes back in. I've got at least a third remaining so I've got some time.
I've decided to start using my SE razors this year and am already getting passable shaves with Gem and Eversharp injectors, I may not use up many DE blades this year at all, but look forward to completing another year with a very meagre stockpile of consumables

Contributor
I had my eye on a SS Lupo .72 base plate and cap this evening...very tempting...but by the Sword of Kahless...I prevailed. Engage cloak!

Contributor
Korum peered intently at the tactical layout on the view screen. The IKS Vek’na was approaching the blue nebula under cloak. Three Tholian Widows were poised on the outer edge of the nebula...for the moment, motionless.

Korum clenched his gloved fists. “Target the nearest ship, Telvana. Prepare to drop cloak and fire on my command.”

The tactical officer looked up from her console, “On your command, sir.”

Korum could see concern in her face. Destroying the three widows would not be an issue, it was what lay hidden just inside the nebula, the unknown element, that caused the concern. The swirling blue vapors and brilliant glow were pleasing to the eyes…almost peaceful to watch…but the K’tinga’s sensor scans were unable to penetrate it. For the Klingon sitting in the commander’s chair, it was a blue hell, one that gave him pause to think, today would be a bad day to die.

Korum couldn’t help but think that this was a trap. The Tholians, for reasons unknown to the Empire, had been raiding ships intermittently for the past three months in this area. Mostly civilian ships had fallen prey to their assaults, but one KDF raptor class vessel was destroyed and its crew taken prisoner. He pondered that for a moment…a raptor class vessel with a competent commander would also be more than capable of destroying three Tholian Widows.

“All stop!” bellowed the Klingon pilot.

Korum’s first officer, Commander Korris, looked over with a menacing glare. “General…this is an easy victory! Why have we stopped our attack run?”

Korum grinned wolfishly, “Don’t you see, Korris? It’s too easy. This is a trap!” His fist slammed down on the arm of his command chair. “Why would three raider class ships sit at the edge of the nebula when they could just as easily remain hidden inside of it? They must think we are fools!”

Korris’s menacing glare took on a speculative look. “Perhaps you are right. But we cannot let them go! There is little doubt that these ships are part of the Tholian menace which we have come here to expose and destroy.”

Korum nodded. “They will all be burning very soon.” He looked over at the tactical officer. “Prepare concussive charges. We'll drop cloak, fire the charges into the nebula directly behind those ships and then blast them into wreckage.” The adrenaline that rushed through his veins forced him to stand from his chair. "The charges will at least have a chance of damaging whatever vessel might be hiding in the nebula behind them.”

“An excellent strategy, General!” Korris exclaimed, his mood uplifted by the competent plan.

A cheer went up in the K’tinga’s bridge.

“Concussive salvos loaded and ready to fire!” Telvana shouted above the jubilant Klingons.

“View screen ahead! I want a visual on those raiders!” Korum shouted.

Korum sat and braced himself in the command chair. “Drop cloak and fire the charges!”

The interior lighting on the bridge shifted from a deep red to a brighter hue as the power from the cloak quickly flooded back into the ship's other systems. A slight shudder could be felt in the deck plates beneath the bridge crew’s feet as the concussive charges left the forward tube just beneath them. Glowing yellow balls of energy shot forward on the view screen quickly followed by two photon torpedoes and red streams of anti proton energy.

The lead Tholian Widow erupted in a fiery explosion, its remains bursting outward as it flew apart.

Two of the warriors aboard the bridge shouted in triumph, but they quelled their battle joy quickly.

The ship rocked suddenly as Tholian tetryon beams grazed the Vek’na’s shields. “Target the second Widow and fire!” Korum shouted above the din.

Another photon torpedo hurtled quickly toward the Tholian raider which was just now starting to move. It struck the small ship sending it into a spiral. Red beams that coursed with a strange black fire quickly cut the ailing ship in half, electrical energy skittering across its dissected hull.

Again a battle cry rang out on the bridge, another volley, another victory.

The third Tholian ship was reversing into the nebula, but before weapons could be locked it disappeared into the blue mass.

Korris scanned his console, “Our forward shield took a glancing blow…down to ninety percent efficiency.” He paused, “No casualties…no one injured.”

As quickly as the shouts of victory had come, the bridge fell silent as the crew awaited the General’s next order.

Korum stood from his chair. “Well done!” He looked at the exultant faces of his bridge officers. “Well executed.”

Telvana glanced over at the General, “I was unable to get a lock on the third Tholian before they escaped into the nebula, General. I failed you.”

“The fault was not yours, Telvana. If they had chosen to fight, you would have destroyed that ship also. The Tholian commander had no choice but to retreat. Good shooting!”

A small pause in intercom chatter was quickly followed by a buzzing alarm at the science officer’s station. “General, Tholian Tarantula emerging from the nebula directly ahead!”
Last edited: Jan 10, 2021

and enjoying the stories folks are writing up.

I have two items awaiting delivery that were purchased last year, but with postal times, have yet to appear. 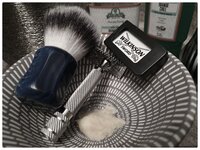