I was comparing my five favorite DE's side by side over the past weeks. All feel of roughly similar aggression to me, but to most people, the ones with more blade flex feel far milder--I think I am just very sensitive to blade flex. Previously, I thought I disliked blade flex due to the sensitivity, but I am staring to appreciate it if well controlled.

Going from most flex to most rigid among my five favorites (interestingly enough, I think this is also from least exposure to most while having about the same level of blade feel on my face . . . . . but with the blade feeling very different):

I liken the results to a car's suspension: The RS-10 is a little on the loose side, but I think has little enough exposure that it doesn't chatter or feel harsh--I think I feel the float or hum of the blade more than the roughness of my stubble. It is kind of like a car with weak shocks that floats, and has a super super smooth ride if big bumps are avoided. Very little blade exposure if any, keeps me from hitting "big bumps" or making it to where the float irritates. The iKon Standard (and I would guess other high-end rigidly clamped blade razors would be similar) feels very stiff and the texture of my stubble is "felt" during my shave rather than the float or hum of the razor--it is so stiff there is no float or hum to the razor and no chance of the car bottoming out or bucking even if a big dip in the road is hit. Stiff is safe.

The Diamondback is the "critically damped" suspension in the analogy. It is the super smooth Lexus and I think this is what people are feeling with the "phantom blade". The blade is there and exposed, but it isn't so stiff you feel the stubble through the blade. It isn't so loose it oscillates. It and the Rocnel are becoming my preferred location in this spectrum. . . . .but keep in mind, we are talking about my five favorite DE's. What I also like about these two is that they provide efficiency with blade exposure instead of Gap, and I don't feel like I have a chance of getting nicked. I guess give me exposure if the suspension is tuned.

I think that what gives this feel to everyone is different though. My oldest son with fine hair really prefers the RS-10A and Weber. My youngest son with coarser hair than me and Acne won't even pick up anything that isn't perfectly safe and rigid. I am starting to find out what I like though, and Diamondback is right there.

I am liking the DB and looking forward to the Javelin. I am hoping the Javelin should have the same amount of blade flex or amount of Damping in a razor (the same type of suspension) even it is different from what I understand.

I think on my face, the Diamondback is critically damped, with the razors to the left up above being more underdamped, and the rigid razors being more overdamped in the diagram below. . . . . but that is on my face and in reference to my favorite razors (none of them are bad). I am preferring the characteristics of the DB or Rocnel the most though. The Rocnel feels more like the One-half of critical damping.

One of the things I do in my job is tune automation loops on control systems. I may be reading my work unfairly into the razors (seeing what I expect to see even if it isn't there), but as I went through these five razors side by side over the past weeks, they felt like control loops with different tuning. Ranges from the critical damped loop to what I would guess is one-quarter critical damping is what I shoot for depending on situation. 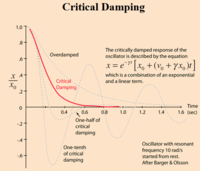 Have been loving the 2020 Diamondback, which is surprising, as most of my shaving has been with a CG Level 1. Does this mean I'm one of the cool efficient kids now?? I have a WR2 on waitlist. Has anyone estimated which WR2 blade bag the 2020 Diamondback most resembles?

ChesterShaves said:
Have been loving the 2020 Diamondback, which is surprising, as most of my shaving has been with a CG Level 1. Does this mean I'm one of the cool efficient kids now?? I have a WR2 on waitlist. Has anyone estimated which WR2 blade bag the 2020 Diamondback most resembles?
Click to expand...

From a blade feel standpoint the .95 from an efficiency standpoint a 1.25 to 1.35. The WR2 is very smooth but the blade feel is definitely there. Just my opinion though.
C

Shavemd said:
From a blade feel standpoint the .95 from an efficiency standpoint a 1.25 to 1.35. The WR2 is very smooth but the blade feel is definitely there. Just my opinion though.
Click to expand...

Puts me back in the pickle! Have been debating which WR2 to get. Wondering now between the 1.05 and 1.15. If it's to be driven daily, do you have a take between the two?

ChesterShaves said:
Puts me back in the pickle! Have been debating which WR2 to get. Wondering now between the 1.05 and 1.15. If it's to be driven daily, do you have a take between the two?
Click to expand...

Shavemd, if I might sneak in a quick fanboy question, may I ask what other razors you commonly cycle in?

I just got my new 2020 paradigm diamond back and had my first shave with it. So far my other razors (fatip gentile plate, Masamune, asd2, pils, hone 5) are all known as mild razors and my initial idea is that the diamondback is more aggressive feeling than all of them. It is possibly more efficient than they are also and very pleasant to shave with. I will be using it exclusively for a few days to get acclimatised with this new toy and I hope to dial in this razor more by the end of that process. Escept for the underside of the top cap that has irregular brush finishing on it (which Andrew already informed of and gave me a substantial discount to reflect that), the fit and finish look impressive though I have not eyeballed the mirror finish that closely so far.

Just a wonderful razor. I returned to my Paradigm 2020 Diamondback yesterday after shaving with my Timeless Ti .68 SB for quite a number of shaves. I put a new Astra SP blade in it for this latest shave. While I very much like the Timeless, the 2020 Diamondback is simply exceptional. My shaves with it have been very close with no irritation, closer than the Timeless. Both the Timeless and Paradigm shave my sensitive neck area without a problem. I am keeping both in my rotation.

I’ve been testing out my new RR BBS but decided to pull out my Diamondback last night, Super Smooth 2 pass BBS. This really is an awesome razor

Tester28 said:
Blade exposure looks to be neutral/negative...which would account for smoothness.

I'd love to know which Wolfman WR2 gap this razor comes closest to...and how much it weighs.
Click to expand...

ChesterShaves said:
Tester - did you ever get a sense which WR2 gap was the closest to the 2020 DB?
Click to expand...

Good question- I would like to know the answer also.

I find mine to be slightly more efficient than my WR1.25. It seems close to the results I had when I shimmed up to a 1.35.

AQU said:
I find mine to be slightly more efficient than my WR1.25. It seems close to the results I had when I shimmed up to a 1.35.
Click to expand...

Any more Paradigm razors this year? I think there was speculation of a Ti this year?
M

I would tend to doubt Andy will be releasing anything in the current future due to him being called out for being dishonest, but Phil over at Bullgoose will be releasing the Asylum 17-4, which is essentially the Paradigm 17-4... He should have the prototype in hand any day now!!

Andy is currently working on a lighter weight SS razor with more efficiency but maintaining the smoothness of a Paradigm. Not defending anyone but there is, as they say, 3 sides to every story, each persons explanation and the truth.
C