I just received mine today so this is just an initial review. Let me start by saying I used the 2019 Diamondback sold by WCS and this 2020 is a totally different razor.
The razor ships in a simple black box with foam cutout a step up from the early days. When I opened the box I was shocked to see a brilliant mirror polished finish, I will post some comparison shots next to my Gold standard, Wolfman mirror polished WR1 and dare I say this Paradigm matches it.
The blade tabs are completely covered and the fit in loading the blade is perfect. The handle has deep enough knurling for a good grip even wet and the design is Classic Paradigm.
For my first shave I used Ethos Lavender soap and skin food which did not disappoint giving an excellent lather and slickness. PolSilver first use blade and my Simpson Polo 14 brush.
With 2 days beard growth, based on my previous experience with the previous released Diamondback I was planning on a 3 pass shave with touchup I couldn’t have been more wrong.
1st Pass WTG. The razor is well balanced with minimal blade feel at approximately 30 degrees angle but I had excellent audio feedback, not too loud, letting me know I was cutting down those whiskers. I was enjoying the smooth nearly mindless, shave. Cold rinse and feel. I was DFS and could have stopped. Since the first pass took down so much I changed my plan and:
2nd Pass ATG. This again was very smooth with minimal blade feel and was again nearly mindless. Cold water rinse and I was BBS. Through on some Thayers followed by Ethos Skin food and as I was cleaning my gear thought to myself that this new Diamondback was everything Andy said it would be in his initial review of the Diamondback. The fit and finish is at the highest level and the shave delivered as promised Extremely smooth shave with an efficiency matching many of my High gap or blade forward razors. I will need to do some daily shaves for a week or so to see if this smoothness and efficiency continues but this first shave surprises me as much as when I first tried the 17-4. Now for some pics: 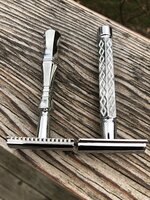 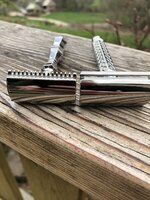 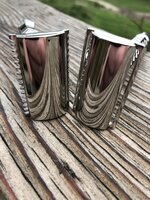 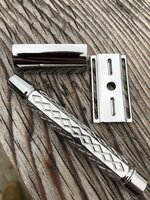 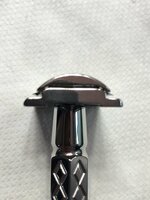 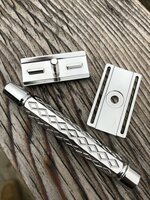 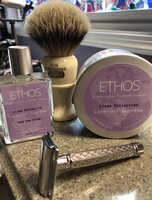 Ambassador
Great review, Mark. How does it compare to the 17-4 please?

Thanks for the review! How does it compare to the 17-4 in your opinion?

Thank You gentleman. I no longer have the 17-4 to do a direct comparison but I would say it is the next step in design from the 17-4. It is slightly smoother than the 17-4 and the efficiency is up a few notches. I plan on comparing it side by side next with my Ti 1.45 WR2, then my Ti RS10 aggressive plate.

Contributor
Great review by ShaveMD. I also had my first shave with the 2020 Diamondback this morning, and can confirm everything that ShaveMD is saying. Based on only one shave, but still the Diamondback made a great impression. Will be using it during the coming week to confirm.

Presentation in the Paradigm box was nice, simple, well done. The razor itself is a thing of beauty. It is also very well weighted and balanced, and the handle provided excellent traction besides being a really nice design.

ILike ShaveMD, I was planning on doing a three pass shave with the Diamondback.

I used the non-tallow PAA CK, preceded by the Cube. Hadn't used CK-6 for a while, and it produced a full and moisturizing lather. If anything, I could have added more water to make it even slicker.

The first pass was smooth as can be. Rinsing off, I realized I could have stopped after one pass. My second pass was mostly to concentrate on the areas under my chin and jaw line, but I completed a full pass in any event using very little pressure.

The handle is longer than my other razors, but so well weighted that I wouldn't change it. The head is nicely shaped and maneuverable, I had no trouble with the areas under my nose. The razor didn't feel at any time like it would bite. I only used Wickham balm afterwards, so can't report on an alcohol test, but don't think there would have been much to report in any event.

The Diamondback left me with a shave that was as close as any of my other razors, and did so with a two-pass shave, not the three-pass shave that I was planning on when I started this morning. It was also as smooth or smoother than my other top razors. That being said, blade feel wasn't absent to the extent that I was tempted to press too hard, as I sometimes do with mild razors, which can result in irritation.

Overall, I see this as being one of the three razors I will use on a regular basis. If anything, I would say it could have a little more blade feel, but in no way is that going to keep me from using it, and it will be nice to have a slightly different feel in my rotation. I would say that this is a very well done razor by Paradigm Shaveware, with a beautiful and different aesthetic as well. Not a razor that I have any plans to part with. Here are some photos taken after the shave. 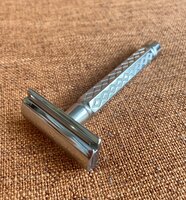 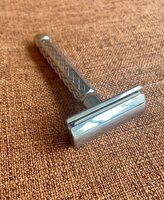 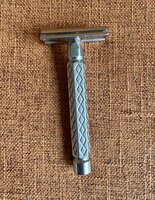 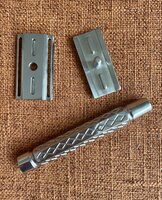 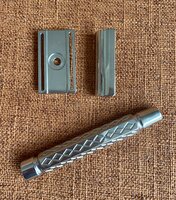 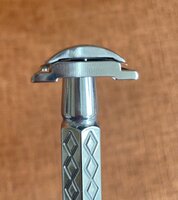 Blade exposure looks to be neutral/negative...which would account for smoothness.

I'd love to know which Wolfman WR2 gap this razor comes closest to...and how much it weighs. 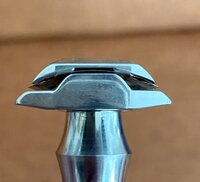 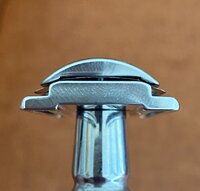 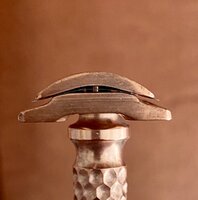 Great reviews and pics gents. Looks like a beautiful razor.

Wolfman Ti WR2 1.45 vs Diamondback
After a great shave last night I had to do a side by side comparison of another smooth yet efficient razor.
Soap TSC 2 Anniv Lisa’s Natural Barbershop
Blade New PolSilvers
Brush TSC 2nd anniversary synthetic
Post Lisa’ natural Barbershop Balm
1st pass WTG. The Wolfie is significantly lighter but both razors are well balanced and easy to maneuver. The Diamondback has slightly less blade feel and the Wolfie has a larger shaving angle but after a cold rinse both sides were DFS and felt identical.
2nd pass ATG. I definitely noticed more blade feel from the Wolfie, not harsh at all, just more feel than the Diamondback. Both razors felt smooth and I could appreciate the soft feeling of the Ti vs SS. Cold rinse and I was BBS in both sides.
The Diamondback stood toe to toe with the Wolfie in smoothness and efficiency and it had a little less blade feel. The shaving angle appears to be less forgiving with the Diamondback but it was easy to find and maintain. I am impressed with the Diamondback so far as it is very smooth but efficient. I need more shaves in but so far it is competing with the best in my collection. Andy’s release of this high polished razor shows Paradigm is back as a top notch competitor in the high end modern razor show. 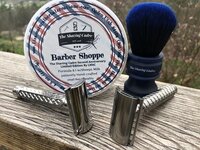 Thank You for the review Mark (@Shavemd & @Music I’m so happy for Paradigm’s comeback in 2020. Job well done by Andy and sounds like it may very well be his best razor yet. The Finishing looks so much better than the WCS version too. In conclusion, I just ordered one.

Check out the finish on mine. Man the lint sure shows up on the mirror finish. 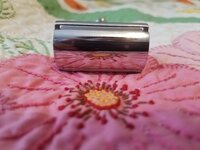 Any thoughts on whether the 2020's shave different or is it mainly the finish--anyone have both for side by side?

Great reviews! I wish I could afford a Paradigm right now but alas I can not.

LewisW said:
Great reviews! I wish I could afford a Paradigm right now but alas I can not.
Click to expand...

It's hard to just look at nice shiny things! I already have two beautiful, shiny SS razors that give amazing close and comfortable shaves. So, for me it's not the cash, but the justification. Now, if it were Ti it'd be harder to say no. Hoping to own one some day. With Karve and [email protected] promising Ti this year I'll need to decide between those or just purchase another Timeless, but in Ti which everyone speaks so highly of. Beautiful stuff.

I was lucky to get a good example of the Diamondback from WCS. Mine was polished well without the rounding of edges and changes in the head geometry that other people described. It is a great razor. Other than the finishing issues, is there anything else that is different with design of the 2020 Diamondback?

crank said:
I was lucky to get a good example of the Diamondback from WCS. Mine was polished well without the rounding of edges and changes in the head geometry that other people described. It is a great razor. Other than the finishing issues, is there anything else that is different with design of the 2020 Diamondback?
Click to expand...

To my knowledge the 2020 razor is the same geometry but is polished from the factory rather than factory brush finish that was polished over.

Tester28 said:
Blade exposure looks to be neutral/negative...which would account for smoothness.

I'd love to know which Wolfman WR2 gap this razor comes closest to...and how much it weighs.
Click to expand...

shaveSymptomatic said:
I had asked Andy about exposure on DFS and he said it's slightly positive
Click to expand...

He's probably right then....I was going by the pictures...probably not as accurate as the
maker's spec sheet.

What a relief. I got one of the best shaves ever with the Diamondback. Last night, I got a very poor shave, but I am pretty sure it was because I was riding the cap last night. I wanted to feel the nice mirror finish of the cap up against my skin. . . and for me at least, that was a mistake. I'm guessing it was causing me to push harder to get the efficiency I wanted, but who knows.

I went back to a more neutral to steep angle, where contact with the top plate (while still probably happening) was more incidental. This felt a lot more natural, and I was rewarded with a 2 pass BBS with very little need for touch up. Alum block only stung on my upper lip, but I go shallow angle there--I am almost tempted to just go neutral to steep there even. Definitely a favorite razor so far. 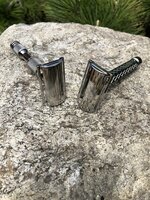 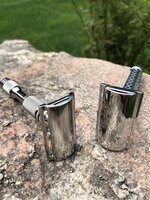 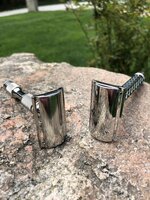