When a guy needs a shave, he doesn't usually get to lean back and relax while someone else gives him one.
These days, most men don't even think of going to the barber for a shave. Consequently, few barbers do them anymore.
But I needed one — and I didn't want to do it myself.
That's when Shorty came into the picture. Actually, his name's Walter Goodwin ("Hell," he says, "most people don't even know my real name"), owner of the Main Street Barber Shop, on First Street in Cheney.
Shorty's down to about one customer a month who wants a shave. "I used to get quite a few, but most of those old boys are dead now," he says.
Barber-shop shaves were a normal part of a man's life before World War II. They began losing popularity with the invention of the electric razor and the improvement of the safety razor, Shorty says.
"With your safety razors and electric razors, it killed the need," agrees Dennis Pehl, owner of the Moler Barber School on West First in Spokane.
Also, these days men don't have the time for a barber-shop shave, Pehl adds. "It takes an average of 20 minutes — that's if the barber's in practice. If not it'll take longer."
While Pehl's school teaches the skill, shaving hasn't been a required part of the curriculum for state barber licensing since 1984.
"It's just a tradition that's gone now," says Shorty.
Too bad. While shaving yourself is a tiresome chore, a barber-shop shave is a production and you're the star, pampered and coddled with warm cream and hot towels.
Well, I was ready for some coddling, so I headed for Shorty's. His place is easy to miss because there's no candy-stripe pole to mark the location. Only the faded lettering on the large picture window overlooking Cheney's main drag offers a clue to his line of work. That and the sight of Shorty and his chair inside.
Shorty doesn't advertise, nor does he have a phone. He doesn't want people calling him, but it's OK if they drop by.
I went in and, while waiting my turn, had plenty of time to look around. Yellow burlap is tacked over the plywood walls. Business cards are pinned next to the light switch. Magazines litter the chairs lining the wall where I sat.
Guys were always dropping in. If the line was too long, they'd stop by later.
When it was my turn, I hopped up on the chair.
Shorty started chatting. I had barely settled in when my haircut was over.
Out came the neck support, which Shorty affixed to the chair. He adjusted the chair until I was reclining and comfortable.
Then he trimmed my red snarl closely with an electric razor. After wiping off the loose hair, Shorty dabbed dollops of cool shaving cream on my face and massaged them in. He wrapped my face completely with a hot, wet towel, which immediately warmed the cream. Shorty slowly massaged the cloth, working the soothing cream into my skin.
He removed the towel and wiped my face clean. The air felt cold, but not for long. Shorty applied more cream, this batch already warm. He repeated the procedure with the towel. This time when he removed it, Shorty left the cream on. And he began the shave, using short, efficient strokes with the straight-edged razor.
When he was through, he wiped the excess cream and hair from my face and massaged in Old Sage Rub. Sage rub is skin tonic with menthol that kills bacteria and treats nicks. It can sting like fire. That soon fades, though, leaving your skin feeling braced and refreshed.
Shorty then put the final touches on my haircut. For short cuts, he dabs on cream and actually shaves behind the ears — a custom that, according to Pehl, isn't widespread but is occasionally practiced as a concession to older customers.
Finally, Shorty put talcum powder on a neck duster and removed those last few clinging hairs.
And that was it. My face felt clean, scrubbed, soothed.
Shorty's price for the shave and the haircut was $5: cheap therapy for the face.
__________________________________________________________________________ 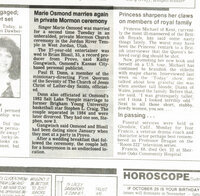 Thanks for sharing this. It's a great article.

She actually still looks pretty good for her age, not sure how much of that is plastic tho Haha!
P


Sent from my iPad using Tapatalk

Contributor
thanks for sharing this.

thank you, this was great

Ambassador
Great read!! Thanks for sharing.