I saw this razor on eBay and was about to pass it up, but noticed it was the long blade stop 1914 and so I kept coming back to it for a couple of weeks and it just didn't go away. Finally I found another razor to buy from the vendor and asked if he would give me a discount if I got this razor along with the one I purchased. It arrived today and it was as ugly as the original pics showed. There seems to be some corrosion along the rear right of the top cap and it looks like someone put a match to it. The handle looks like it could use some polishing, but the base looked pretty much intact. I got this soaking in Dawn right now and will get to work on it tomorrow. Overall, I think I can get it running again. 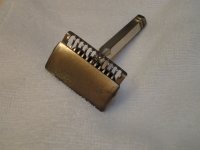 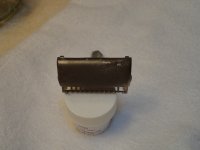 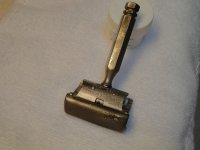 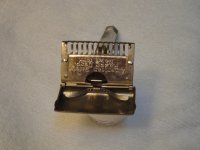 Looks like a good solid razor. Long blade stop? Does that shave differently, or just a manufacturing difference at some point in it's manufacture?
T

I found this, but the pix are gone.

According to @spidey9, the long blade stops came in later versions and they do help hold the blade in place as you try to gently snap the top cap back on. I have one that I got from another member and it really helps in loading the blade. For some reason, I just got used to the small stops and use that as my rotation shaver. Seems it's easier for me to complain about the 1914 being a PITA than for me to use the better one.
T

gvw755 said:
According to @spidey9, the long blade stops came in later versions and they do help hold the blade in place as you try to gently snap the top cap back on. I have one that I got from another member and it really helps in loading the blade. For some reason, I just got used to the small stops and use that as my rotation shaver. Seems it's easier for me to complain about the 1914 being a PITA than for me to use the better one.
Click to expand...

So, you're just a cranky old cuss!

I hope the patient lives!!

Look forward to the after pictures.

Looks like it will clen up nicely, most of the grit seems to be an the surface.

Glad to hear it's not terribly awful. It looks like she'll be a good razor once cleaned. Best of luck and I hope your elbow is nice and greasey!

Okay, project was not as bad as I was fearing. Kind of anticlimactic when you consider that my last razor project was my kamisori entry in the GD Mod Competition. What I feared might be major pitting on the rear right of the top cap turned out to be serious build up instead and an hour of progressive sanding made the top cap smooth again. Of course the nickle plating was completely gone and so it kind of looks like one of my vintage Gillette New with a metal cap looking different from the baseplate. Hit the head and handle with Mothers and then a couple of cycles in the ultrasonic cleaner, and that was all it took. I spent some time trying to tame the two springs in the rear of the head and it worked a bit, but it still has a snap like a mouse trap. I noticed that the top cap did not lie flat on the top of the blade and it was probably because it was deformed a little by what looked to be a fire. Not too bad though, but I will see tonight with the first shave. What I will go through to save a long blade stop 1914! 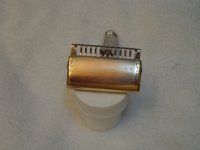 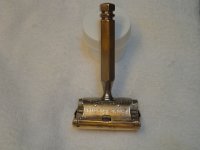 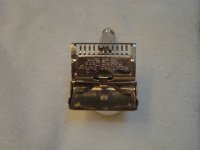 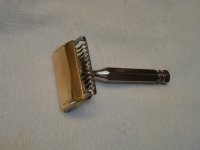 Nice work! Let us know how it shaves.
T

The caps on the '14 usually have a crown, by that I mean there's a gap over the center of the blade.
T

That pesky center spring is the one that snaps the top shut, but if you mess with it too much the cap won't be tight enough when in the fully closed position. It's just a quirk in the '14 that makes it special.

It come out pretty sweet, great job!
Look forward to the shave report.

Okay, couldn't leave well enough alone and so I used an old straight razor trick and got a teaspoon and tapped the front of the top cap just to get rid of the gap. It worked a bit, but a slight gap was still there. I decided to go ahead and shave anyway. As always, I loaded a Gem PTFE blade about three shaves away from being tossed. Immediately I noticed some blade chatter which never happened with my other two 1914s. This could be due to the tiny gap or the fact that the top cap was just slightly thinner because it was missing a nickel plating on top. Shave went well as a 1914 usually does. WTG pass was very efficient and cleared out most of my whiskers, ATG finished up the rest. There was some touch up, but so little and only to the most problem of spots that I just called it a two pass shave. Once again I don't have any regrets returning my Sabre. I think from now on, whenever I start thinking about the Sabre again and what an idiot I was to return it, I'll just pull out my 1914 and shave with it.
You must log in or register to reply here.

A Razor Restoration Project (with a slight twist)
2