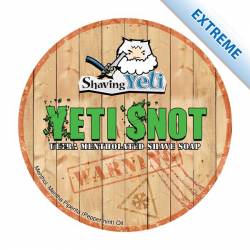 Loading…
Pros: Smells nice
Cons: Not too easy to lather and not enough skincare
Truly, if you love menthol this soap is your ticket because it contains a menthol blast which hits you almost instantly. One recommendation I have is try to keep the lather away from your eyes, because the menthol fumes are so strong that they will cause them to tear. The scent is a very strong peppermint type which I really enjoy with a powerful menthol note. Lathering this soap is not such an easy thing because it takes a lot of playing around with the water/soap ratio to get it right, and the resulting lather is that thick. The skincare of this soap to me anyways, falls short of the mark although I have seen worse. Regarding the price I'd have to say n/a because I received a puck of it from a friend of mine. Would I buy it again? No, because I feel there are better soaps out there.

Pros: Lathers easily and it gives you face freeze
Cons: None
Yeti Snot

I have been wanting to try this soap for a long time since I have tried other mentholated soaps. I was reading that this is the coldest soap around right now. I was curious about this soap, so I bought a sample pack on the Shaving Yeti site for $10. They sent me 5 different soaps including Yeti Snot. I had not shaved for 4 days because I was sent a message saying my package was on its way. Shipping did take a while but I did hear they are backed up on their orders.

After getting my samples I was a bit hesitant to try this soap because of the possible side effects. After all there is a WARNING label on their site. I tried it out anyways. When I opened the sample from the bag it was in, it smelled like medicine. Specifically like Vicks VapoRub. I did think for a bit that they poured some of that Vicks into the soap. I was using a Badger and Blade Remembering Sue boar brush. After a warm shower I started to lather it in a bowl. It did not take long and I got a decent lather out of it. I proceeded to put the lathered soap on my face and I started to feel the coldness on my face like five seconds after. The scent was again very medicinal like Vicks. My eyes started to water and I felt like I was crying and shaving. The tears did not interrupt the shave. I finished the first pass and I felt good. My face felt like I was out in the snow, very cold and burning a bit as well. The second pass felt similar to the first except that I started to feel a little light headedness from the smell of the soap. I finished the second pass and I did feel a face freeze effect, but that is the reason why I got this soap in the first place. I did a third pass but it was a very quick pass. It was more of a cleanup pass. I put cold water on my face to clean off my face and it felt awesome. My face felt even colder. I then put some aftershave on but still felt my face pretty cold like ten minutes after shaving. It also felt good when I went outside around 8pm because the outside temperature helped my face stay cool. It was like 65 degrees Fahrenheit out in Los Angeles, CA.

I would also like to add that it is colder than QCS Vostok in my opinion. This soap will definitely clear up your sinuses. I'm wondering if that's how they came up with the name. If you've got snot in your nose this soap will clear it up.

Also, I did try Osage Rub as an aftershave on the second time I shaved with Yeti Snot and it did give me an extra menthol kick. It felt a bit more cooler for about ten minutes after shaving.

Base Soap Ingredients according to their site: