I picked these DE Blades from Walgreens when my new razor came in. I wasn't so sure about the Walgreens brand but it's all they had. I was very pleased with the quality. I have nothing to compare these blades to, but for my first shave with a DE razor I wasn't disappointed. The blades were very smooth on my face and im still using the same blade after a week with the same results. Walgreens is very proud of these blades though, at $5.49 for 10, I think that I could find a better blade for my money. 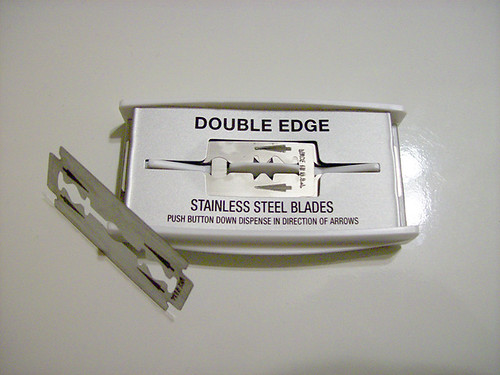 Pros: Easy to find
Cons: Horrible blades
It's at Walgreens, so they're very easy to find. But they are pricey, I spent far less on my Personna, Derby, Feather and Wilkinson blades all of which provided a far superior shave than these yanking sheets of metal. I have used only a few blades from the package because I always think that there can be variable quality in a single package. Nope, they were all bad. I haven't thrown them away yet since I paid money for them, but I don't think I will ever use them again.

These blades are manufactured by American Safety Razor in the US. They are available online and in Walgreen's stores, but the blades cost more in the stores I have visited than they do online. I was disappointed with the lack of quality and performance, especially when weighed against the high price. The same blades can be found at other stores (bearing their own logos and brand names) for 1/4 the price.

In a pinch, these blades would be acceptable. However, at this price, I would look for single-edge disposable razors if no other double-edged blades were available.

Price: $7.99 for 10 blades–$0.80 per blade. That is a lot to shell out for razor blades, especially considering their quality. Speaking of which...

Quality: Inconsistent, pitted bevels with nicks and gouges on edges.

Sharpness: Sharp enough I suppose, but it seems the sharpness is negatively impacted by overall quality of the blades.

Longevity: Each blade lasts 3 days for me.

Smoothness of Shave: Minor nicks and razor burn in 2 types of razors.

Packaging: Metal and plastic container of 10. Blades slide out of both sides (blades are not wrapped); slot for used blades in back. This system is first-rate.

The major drawback is the price. I think I paid $7 for the ten pack. I had already decided that I would never buy them again before I had arrived at the register. I've already achieved BBS with Merkur, Feather, Derby, Sword, and Shark, and they were all cheaper than the ones at Walgreens. Plus, Walgreens are made by Personna and you can buy Personnas for around $2.

The first shave with these blades is really sharp, but smooth and comfortable. The second shave is very comfortable, but I couldn't quite get BBS in the "hard to shave areas". The third shave is totally worthless. I found myself using way more strokes per pass and feeling pretty tender after the shave. I was never tempted to try a fourth. After two weeks of midweek torture shave, I decided to just get the two good shaves out of these blades and move on.

Now, there's a chance that my beard is a little stiffer than average, but I'm no Wolverine. I expect 3 shaves per blade, especially from a blade priced higher than Feather. I really think the first shave is excellent. They just cost far more than they're worth.