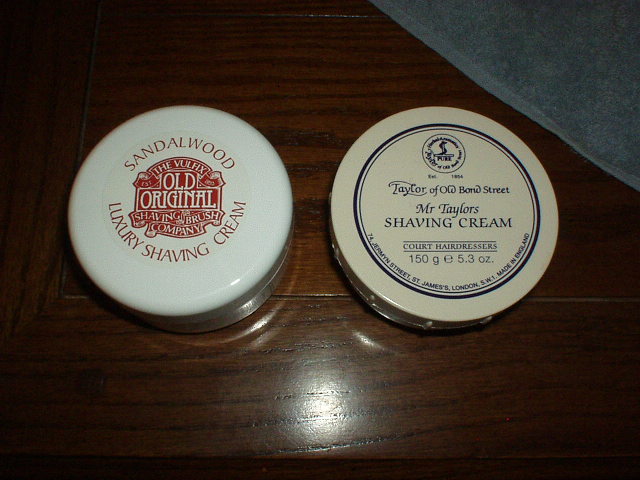 Gents,
This shaving cream got an awful bad rap right from the beginning. Before this cream hit our shores for distribution, it was already receiving lackluster reviews and was touted to be wildly medeocre, and have a **** poor "synthetic" scent. From the get go - this stuff just didn't interest me as for some reason the jar struck me as terribly ugly, low rent and drab looking - and coming from a fan of salter shaving creams - this means an awful lot. 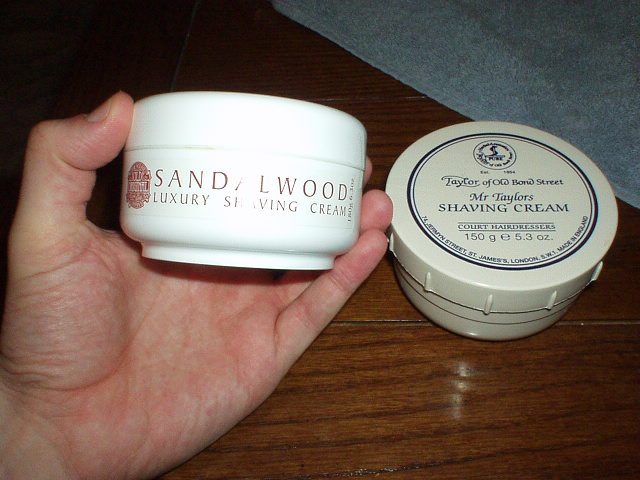 The label looks VERY cheap and bland, and the plastic tub itself looks awful rinky dink. For the aformentioned reaons, this shaving cream just never really interested me, and even when offered a free sample - I passed it up, as I just out and out had no interest in trying/using this product.

My curiosity began to build after speaking with Hedonist, and him having spoken quite highly of this product - and that it moisturized his face much better than any other english cream.... I was a bit skeptical, especially with all the negative - or medeocre reviews out there of this creambut decided to give it a go regardless. 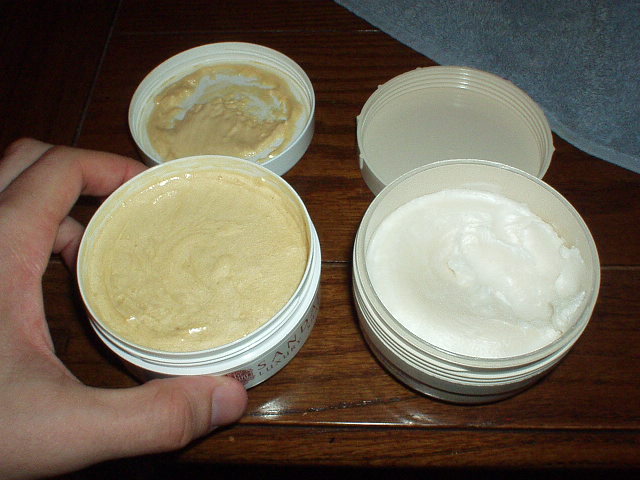 When you open up the lid - you are immediatly taken a back by 2 things, the look of the shaving cream (has the consistancy of cream of wheat) and the glorious and powerful scent of the sandalwood cream. As far as sandalwoods go - it does not smell like a "true" sandalwood, but has a wonderful fresh-baked ginger/cinnamin cookie type of smell. Personally I really enjoy the smell of this shaving cream, and it brings fond memories of my mothers fresh baked cookies. 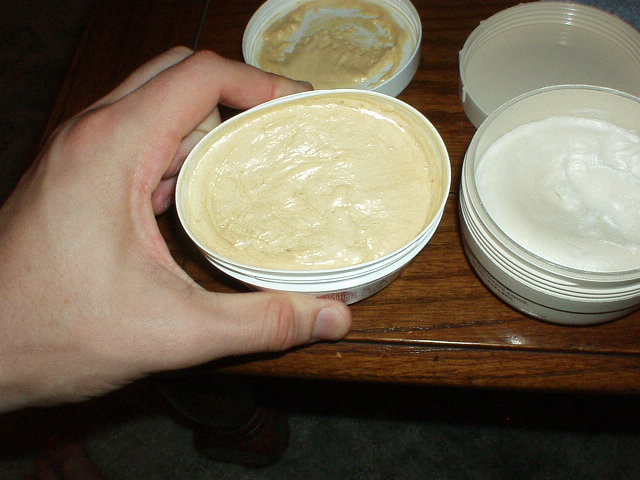 One grip - again, is the rinky dink jar... I wish vulfix would catch a hint from AOS, or the 3T's and put out a sturdy, decent quality jar - but although a twist off lid with threads - the plastic was so flexable - I mistakenly grabbed hold of the jar firmly and pulled the top off (with ease). One squeeze and the whole jar flex's, very odd.

The vulfix cream is also incredibly runny/liquid like compared to the 3 T's. - Here is a pic of a tub of Taylors VS a tub of vulfix.... 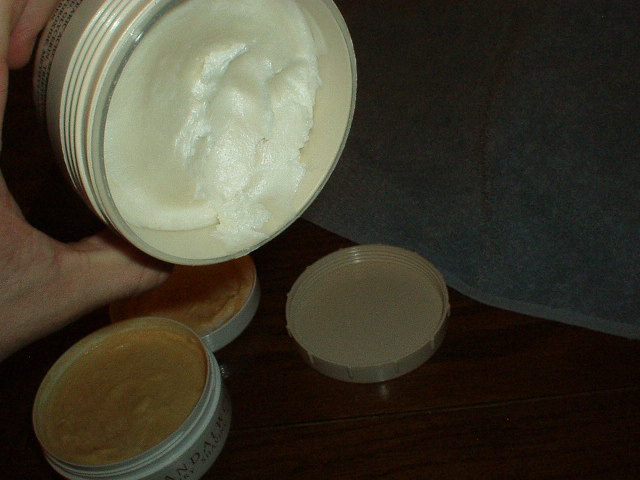 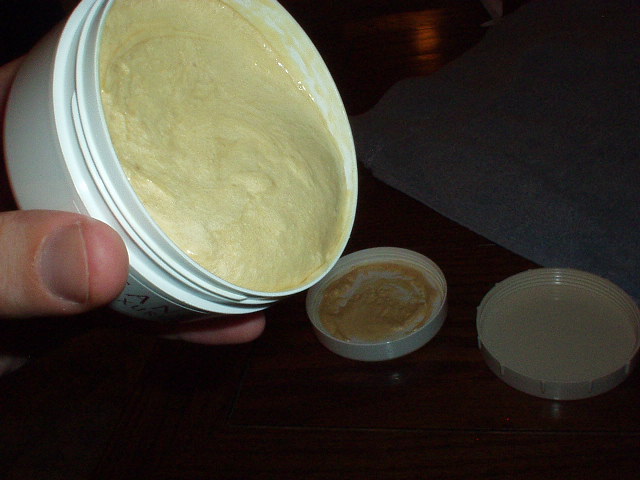 Notice - when I tilt the vulfix jar, the shaving cream immediatly starts to move and soon there after begins to "our out" 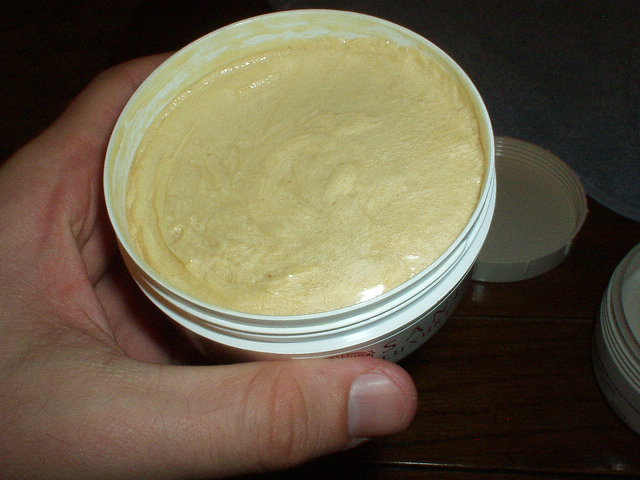 The Verdict - I really enjoyed this shaving cream and feel it has received a bad rap. Due to its "loose" nature, it is incredibly easy to load your brush with this shaving cream - and with very little effort you are rewarded with copious amounts of thick, rich, creamy, hydrating shaving cream. I personally really enjoy its scent and feel it is just as efficacious as the three T's - trumpers, taylors, TrueFitt & Hill. I do agree with Hedonist, in that it does moisturize better than the other english creams. If they changed the jar, they wold have quite a product, but even in its current fashon - it is worth looking into, and I would suggest this cream to a beginner, as it seems to be the easiest to load into your brush, and very reasonably prices - without too many (sometimes confusing) scent options.

I received the Sandalwood and Lavender as a surprised gift from my gf. She picked them up at TJ Maxx for around $6ea. Mine seemed to have a firmer consistency at first but thinned out after dipping the wet brush into it for a few weeks. Might be a good idea to scoop it out instead of dipping. I really like these creams and apparently so does my gf, Ive caught her stealing some of the lavender cream and my brush to shave her legs! This stuff seems to lather up really quickly and easily and provides a very slick and protective lather. It doesn't dry out my skin even when i take my time and do 4 passes. The only complaint I have is the packaging. Its very flimsy and the tape the use to seal it gets all sticky after a few weeks. Luckily that doesn't effect the performance of the cream which is great. Highly recommended!
Maybe it's because I live in the frigid north, but at room temperature, mine wasn't liquid at all, it was quite firm.

I love this cream, takes a little longer than some others to get the lather, but it's nice and slick once you do. The scent has a hint of "soapiness" to it, but otherwise, it smells good. I have oily skin which almost nothing dries out, so I can't really say anything about the moisturizing effects of this cream. In my rotation for sure.

I completely enjoy this stuff. I was surprised at how well it lathered and shaved completely easily. Packaging I really don't care about but I agree that it's plain and somewhat flimsy. Smell wise I agree with initial reviewer, not quite sandalwood...I'd describe it almost as snickerdoodle smelling. Maybe. I still love this cream though, in my regular rotation for now.