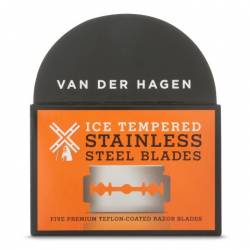 Pros: It doesn't leave a whole lot of nicks.
Cons: Dull blade; not as close a shave as other brands.
These came with the Van der Hagen safety razor handles I bought at Target and Wal-Green's. I have to say that for all the bragging of German-made "ice-tempered" blades, it's obviously just a marketing ploy to get you to buy the replacement blades. Don't bother. You'll simply be wasting your money when you could be buying a better blade for fewer dollars.

That said, there are a couple of things that make the Van der Hagen blades not totally worthless. Despite their dullness, I got very few nicks with them, and I chalk those up more to my inexperience with a safety razor and certain parts of my face and throat nicking regardless of what sort of blade type I use. While they don't give nearly as close a shave as, say, the Astra blades, they're still comparable in closeness to your standard three- or five-blade cartridge. And they're still far cheaper than a four- or eight-pack of Gillette cartridges, which can run anywhere from fifteen to thirty dollars, though still overpriced for the quality of shave they offer.

My advice is to get yourself a hundred-count box of Astra blades, which at an average of ten dollars will give you one to two years of shaves. Your face will thank you for it.

Pros: available in most pharmacies
Cons: available
I picked these up early on because they were there. I'm a wiser shopper now, just because something is available doesn't mean I should use it. These are terrible blades and I have never had a comfortable shave with them, even with the most forgiving razor and slickest lather.

Pros: Locally available
Cons: dull, tuggy and bitey
way overpriced
I got one shave out of each blade before it became completely useless, and the one shave wasn't even that good. You can get blades that are hundreds of times better than these for a fraction of the price. However, if I'm in a huge pinch while traveling and I need blades, I know where to find these. The packaging is also a fairly good looker.