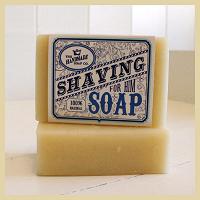 Shave Soap for Him

Loading…
Pros: Smells good, easy to build lather
Cons: Shape, bubbles can break easily
I put "N/A" as I received this soap for free. This soap isn't too hard and isn't too soft. It was really easy to build a lather (I like to build the lather directly on my face) and the consistency on my face was really good too; sometimes though, the bubbles break easily, sometimes they don't, I haven't identified what causes that because I always use the same routine. The lather is thick but not slimy like I've seen with other soaps. I did two passes with one "load" on my brush, the same I get with my current Edwin & Jagger soap.I love the smell, it's fresh, not too strong, like it should be. It keeps my skin moisturized, that's one of its strongest point.Overall, a pretty good soap, I just wish it was available in a puck size to fit in a mug; I build the lather on my face so holding the wet soap bar is not the best. Definitely worth a try.Edit: For some reason the website keeps puting "NO" under "Would you recommend this product", I mean "YES", so if you see "No" don't bother, I do recommend it.

Pros: Scent, Skincare
Cons: Lather
This review has been edited to reflect a reformulation.

My original review was of the original formulation of the Shave Soap for Him, which was a vegetable-oil-based soap. It smelled heavenly, but was inadequate as a shave soap.

A representative of the Homemade Soap Company wrote to me and asked if I'd consider trying their reformulated shave soap, to which I agreed. In the interest of full disclosure, the soap I received was free. It is normally about 7 Euros plus shipping for a 100g bar.

I agreed, and received the new soap a couple of weeks ago. I have shaved with the new soap ten times in order to form a solid opinion.

The new soap is definitely an improvement over the old!

The skincare is phenomenal! No soap I've used leaves my skin feeling so healthy, not even Mitchell's Wool Fat. The glide has been improved, and this soap is actually a decent shave soap. The scent is also very nice, though not as good as the old one, which had vetiver and juniper.

While this soap lathers better than it used to, it is still pretty dismal. I lathered in a bowl and on my face. Face-lathering was a complete failure, but bowl-lathering (after much effort) produced a loose but surprisingly usable lather. This soap does not create sufficient cushion, so I had to be sure to use an extra-light touch or else I got some nicks in the trouble spots.

All aspects considered, this is a good shave soap for a mild razor and a light touch. While it may not be a good soap with which to strive for BBS, it seems like a good occasional soap for those days when the face needs some extra-nice skincare.

I also received a bath soap with the shave soap, in the Grapefruit and Oakmoss scent. It has a wonderful scent and great skincare as well, and I can highly recommend the bath soaps!

Pros: Moisture
Cons: Not enough cushion
I was given a bar of the Handmade Soap Co's Shaving Soap for Him as a way of helping mellow out the skin sensitivity on my neck. While I was waiting for it to arrive, I wasn't sure what to expect - I wasn't sure if it would be a soft soap or maybe a cream or what. When I received the bar, the first ting that struck me was the scent. Before I could even take it out of the envelope, I knew that I had found the best scent that I have encountered. I tried to describe it to a friend, and realized that I can't. My only description was, "it smells like....good." Once I got over the scent, I took a look at the bar. Instead of the expected soft soap or cream, it was a bar. I had never used a bar before - my hard soaps are from MB, and come in a bowl. This threw me off a little, but it wasn't the end of the world, as I have a bowl that I can store my soaps in. Looking at it, the color wasn't the most enticing. However, as I am continually reminded by the missus, natural and good doesn't mean enticing. On to the shave. I got some soap on my boar brush and built a nice bowl lather. It wasn't the foamiest or creamiest lather I have seen, but it wasn't bad and turned out to be enough for four good passes with a little left over for buffing. The shave itself was quite nice, but not perfect. I've had better cushion and smoother glide - something that I later found I could compensate for by using this soap as a component in an uberlather. Nevertheless, the shave was satisfactory. My FB and Dorco combo yielded minimal burn and my neck had few weepers - similar to what I have achieved with other soaps. After my shave, however, the soap really excelled. I wrapped up my shave, warm rinsed and then cold rinsed. And when I cold rinsed, I noticed something different. My face felt "moister" than it had with any other shaving soap/cream/gel/etc product that I had ever used. Absolutely superb. Is this the best soap on the market? Probably not. Is it the best I've tried? Maybe - at the very least it is near the top.