So the brush finally arrived yesterday after great anticipation. I ordered it from Vintagebladesllc which was a great experience in itself. Definitely going to shop from there in the future. They have great prices. Especially on this Rooney.

Price: For 75 dollars, I believe this is a very competitively priced silvertip. The only brush I've really used before was a C&E BBB. It's a great brush, but for 75 bucks, this Rooney is so much more spectacular. It was definitely money well spent.

This is an extremely well crafted brush. The quality of the imitation tortoise shell is simply beautiful and the handle has very classy and elegant lines. It's very pleasing to the eyes. Even though this is my first silvertip, as soon as it touched my cheeks, covered in lather, I knew this was a darn good brush!

This brush is so dense, if it were a guy, he'd be an idiot! Compared to my C&E BBB, this is really thick and dense. I've been told by several that there are many brushes with denser knots, but for 75 dollars, I couldn't ask for more.

The brush is so soft. The knot is nice and dense, giving it great stiffness for soaps and not floppy at all. But the tips, WOW. I couldn't describe how it felt at first. I told SWMBO that it felt like doves flew past my face with their wings covered in lather. She said that didn't sound all too great. So now it's angels! Angel wings!

The brush feels great in the hand. I love the 22mm knot size. I've never tried the big brushes, so I can't honestly compare. But I think the medium knots are perfect. And it sounds like many others agree. The handle is very comfortable. It has a nice weight, a little heavier than the BBB, which I think is great! Can't fault it as far as ergonomics are concerned.

This thing lathers amazingly! The lather is nice and cushiony. And after 3 passes, I still had plenty of lather left. I look forward to the next shave with this brush. So far I've only used it with DR Harris Cream, but I'll try it with the Tabac next. I'm more of a soap guy so I'm looking really forward to that!

Okay, enough of the chit chat. After all, I know what you guys want are the pics!

Here it is compared to the BBB pre-bloom 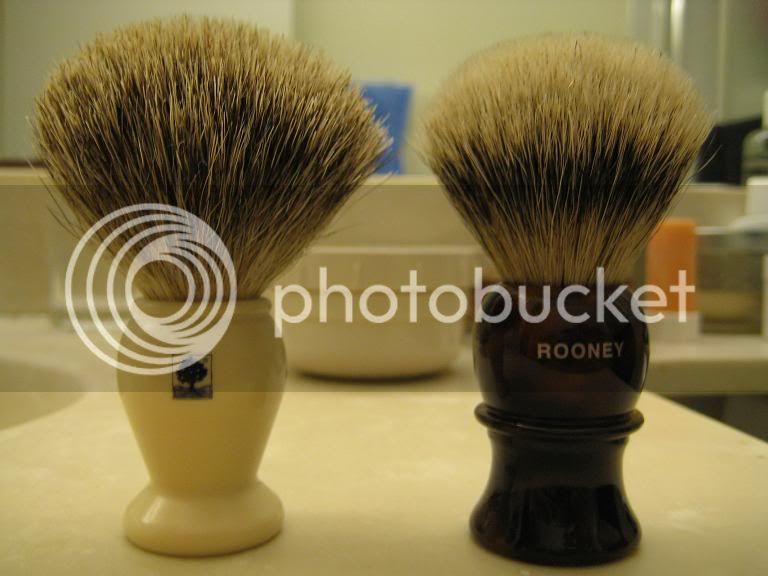 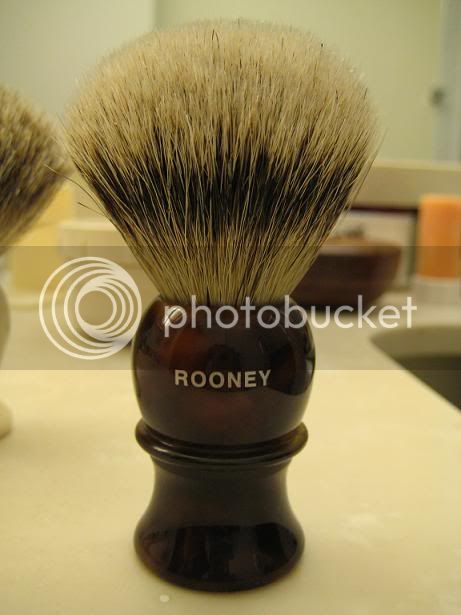 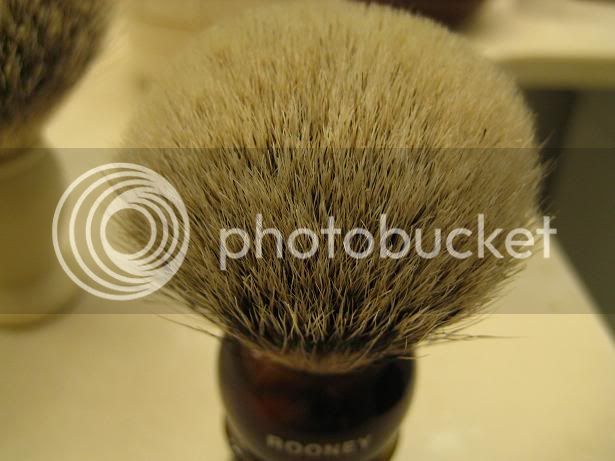 After a bit of bowl lathering
View attachment 52879 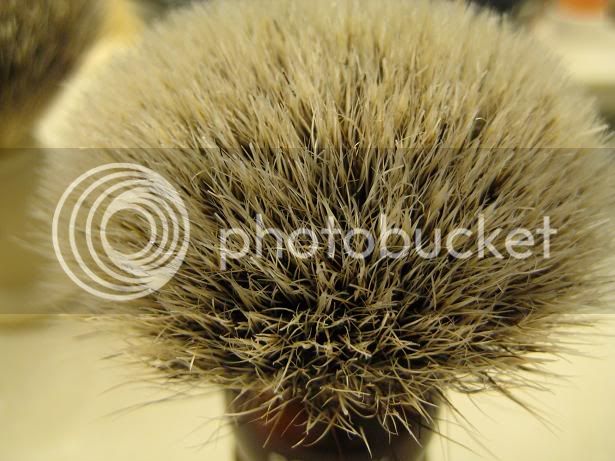 Pros: Soft, barely scritchy, excellent lather maker
Cons: Core sometimes drops water when pressed againt the face
I purchased the Rooney 3/2 in best badger two years ago and it has been my daily brush since then. Well, until I bought a shavemac off Ebay recently anyway.I love the Rooney. Scritchy enough that the skin is worked a little, but not anywhere near irritating.Makes a great lather, especially with creams. I use Truefitt & Hill, Castle Forbes and Queen Charlotte creams and a Truefitt & Hill soap.I do need to be careful about shaking out most of the extra water before lathering. I can always (and I usually do) add another dollop of water when starting the lather. If I forget to shake out the excess water, and I sometimes do, when I start lathering the face, the pressure pushes water from the heart of the brush out and it runs down my chest.It shed a few hairs during the first few months of use and since then rarely loses one.

I got one of these off the BST.

It lathers extremely well, holds a great deal of water, feels fantastic on the face.

Super Dense...I have a Kent 2009 B&B LE and it is far less dense, though both are super soft and great with both soaps and creams, the difference is visible and tangible.

I got this brush from CS. It has a 44 mm loft although they have not updated the site yet.

I first want to say that I feel fortunate to have avoided SBAD and could think really, really well what high-end brush to buy after a Tweezerman.
I wanted something with back-bone, yet soft on the face, good with both soaps and creams; although I prefer soaps and face lathering. The Rooney 3/1 in Super Silvertip accomplishes all these requirements.

Price: for $75 USD, I think it's the best bang-for-the-buck brush out there.

Quality: impeccable. Really well made with a very comfortable handle.

Density: I gave it a 9 because I know there are way denser brushes like the Chubby or the shavemacs. But this Rooney doesn't lack anything in terms of density.

Stiffness: I would have prefered something a little bit stiffer, like a 2-band simpson or a shavemac in finest. However, it has good back-bone and gives a very pleasant massage to the face.

Ergonomic: perfect. No lather on the handle with either bowl or face lathering.

Latherability: I've lathered CO Bigelow shaving cream in a bowl, and face-lathered the triple-milled French soap Pré de Provence. This brush excels at both bowl and face-lathering without any problem.

I would like to add that it's a little too big for my face, being a fan of smaller brushes. I think that an Emperor 1 would have been better for me but for now I needed something that exceled at both face and bowl-lathering so I went for this Rooney.

Really, this is the only brush I will ever need and there's the outstanding price; come on, only $75 dollars, most silvertip brushes cost from $100 and more!

I've uploaded some pics (one with a tweezerman there for size comparison) and here's a link to the video I made for my brush: http://www.youtube.com/watch?v=20REur8O5eE&feature=channel_video_title

In conclusion it's a wonderful brush, satisfaying in terms of back-bone, softness, versatility, and lathering-power. I'm sure it will satisfy even the most discriminating shaver.