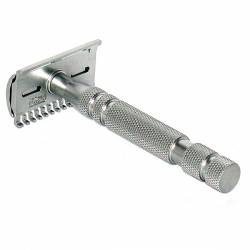 Loading…
Pros: 2 shaves with the one head!
Cons: Handle was ok, but nothing special. Replaced with MR5
I replaced the handle with the MR5, nothing wrong with what it came with but the MR5 was made for this head for grip and dexterity and was just a better choice.

But you dont shave with the handle, so to the head. You get 2 shaves with this, depending on the side you use and i use both in a shave.

I used a feather blade and im getting BBS, irritation free and didnt need to stop after the second pass and use my second razor, the mild DOC (double open comb) from Phoenix. I cant do 3 passes with my skin with the R41 or 37C as the irritation kills me for hours afterwards and i like a smooth finish shave.

Buy if you can, iKon often dont have stock but you can find them online. The DLC or TEFLON coating looks good and it might slide a LITTLE better but i wouldn't pay more for a DLC. Also dont screw the handle on too hard as its made from aluminium and it will last a lifetime if your carefull...

Pros: Smooth close shave
Ikon makes quality razors. I have been very satisfied with each one I have.

Pros: Quality (perceived and actual); versatile head
Cons: Expensive.
One of the best razors I've ever used, and immediately elbowed its way into the Rotation. [Thank God for RAD!]
Be aware that this is a big razor, especially with the OSS handle - virtually the same size as a Merkur Futur. The head is markedly less bulky, though. IKon manages to cover the blade "ears" without the enormous overlap of the Futur, and the blade corners are not exposed as they are with the Futur.
The dual head is indeed a brilliant idea. I'm used to an OC, so tended to favor that side, but the closed side is well-suited to XTG passes. The closed side seems to work better if you stretch your skin; the open side doesn't seem to care much either way. Both sides of the iKon 101 seem to self-clean better than the Gillettes, and rinse easily.
Nothing but praise for the handles, both the OSS and the Bulldog. Their knurling makes your grip very secure, and the weight adds control as well. I have a slight preference for the Bulldog, as it is more maneuverable for work around the neck area (the extra length of the OSS requires one to be very conscious of the blade angle).
A note on the ratings: It's odd to rate a non-adjustable razor on adjustability, but there's no n/a ranking; my ranking it 7 is based on its versatility, what with the two different sides. Blade replacement is slightly harder than with an older-style (Gillette) 3-piece, since the ears don't stick out, but keeping them unexposed is an advantage in my book. Re the "aggressiveness" rankings, is a 10 "behaves like a straight razor", or is a 10 "exactly the right balance between cutting and danger"? IMO the iKon 101 does a good job of getting at the stubble without bringing the skin with it, but there are other razors that will shave closer on a single pass. The "10" on grip is the only 10 I've ever awarded on any B&B ranking; I simply don't see how a handle could be grippier without adhesive, and the thickness is well-nigh perfect.
In sum: an expensive razor if your frame of reference is used Gillettes, but well worth the money in my estimation. Just do what I do with all my other RAD/SBAD purchases - rationalize it by amortizing the cost over the next five decades. Done that way, it's dirt cheap. Cheaper than dirt if you can find a blem deal.

Pros: Solid as a rock, great blade angle, combination of styles
Cons: It is expensive
A great razor. I got mine on ebay from a guy who wanted a more aggressive cut, but I feel it is plenty aggressive for me, and I've got a gnarly beard. It is machined and should stay in its present state and condition long after I've gone on to a place where shaving isn't necessary. I particularly like the fact that you have a comb on one side and a bar on the other, I use the comb for pass one and the bar side for subsequent. The blade seats precisely and is well gripped, and the angle is just right for me. I will probably pass this razor down to my son if he doesn't buy one for himself. I don't know how you could do much better. If you aren't into razor collecting, this could be your one and only razor. Well worth the price, and I got a bargain on a used one.

Pros: Dual Head:Awesome Idea
Cons: It ain't free!
First off, my review is for the Ikon Bamboo, but it has a similar head. I do 2 passes with the open comb...that's usually enough above the jawline for a bbs finish. I do a third pass below the jawline with the closed comb, and also any touchups. I stretch the skin as in straight razor shaving. This baby gets me as clean as a straight razor, with more comfort and less attention to detail. The open side is a little less aggressive than a Tradere and the closed side is less aggressive than an EJ89. With the closed side being mild, yet effective, you can use aggressive techniques without hurting your skin. The dual action head is a brilliant idea.

Pros: oc & cc
Cons: none
shaves better than my feather witch was my favourite more becouse it was so well made 100% on engineering but shave quality go's to ikon oss one pass oc one pass cc feather blade carefull or derby for quick shave' i have a ww1 oc short handle gillette i have owned for 40 years i dont use very often but probably still the best

Pros: Weight balance, head design makes for easy shaving around hard to reach areas
Cons: none
This is my go to razor. I have a Gilette late 1940s SS and a Edwin Jagger 89l. The EJ89 was my favorite before my Ikon. I just like how the Ikon feels and the head design makes it easier for me to get the best of both worlds. I searched far and wide and must have read every review before I pulled the trigger, do it you wont be sorry!

Pros: Combo open comb and safety bar
Cons: Need to rinse more often
Got mine a few weeks ago, put a personna red in it and shaved this morning. WOW!!! Best shave ever, get the angle right and let gravity do the work. A really nice "singing" sound as it mows down the stubble. A SAS in one pass (with the open comb), BBS in three (2 & 3 with the safety bar). Minimal irritation on my adams apple (my trouble spot and first place to "burn") My only complaint is the handle and head need a little fiddle to screw together, but should smooth out after a few screw/unscrew cycles.