Soon after moving to France I noticed the Monsavon bowl with shaving soap in pretty much every grocery store. As I have been a cream guy for a couple of years (since I started getting interested in these things) and never really had any luck with the soaps I tried, I first decided I wouldn't buy it. The fantastically low price (around 1.70 euro) also indicated to me that I wouldn't loose much by ignoring it. How wrong I was!

After reading some generally positive comments about this soap, in particular the post

I decided to go ahead and by it. I was attracted by the fact that it is something in between a hard soap and a cream. This, I reasoned, would make it easier for me to load my largish brush and probably give me a better lather than the soaps I had tried before. Before leaving France I will probably buy at least three more of these soaps. Here are the reasons:

Scent: It has a spicy and creamy scent which I find very pleasent. My first thought was something like cloves or some warm spice like that, mixed with milk or cream. It is a smooth scent, not at all sharp or citrusy.

Efficacy: It is one of very few products with which it seems impossible for me to get any irritation, nicks, or cuts. With a sharp blade, or with a relatively dull one, I just get very good shaves with zero irritation. This is something that does not happen to me that often, despite elaborate technique, and it is my own quality mark on a product. Basically, it can't get better than this (for me).

The packaging is a cheap plastic bowl, but I have no problem with that for this price. In fact, I kind of like the plastic bowls some soaps come in, as I'm not after luxury for its own sake. The overall quality/price ratio is extremely high. It is rare to find products this cheap that actually work very well.
The moisturizing properties seem to be quite good too.

Pros: Price, easy to find in france
Cons: Sent
I have sensitive skin and have been DE shaving for about a year and half. I tried many shaves soaps at first some shave creams. I've noticed that tallow bases soaps and creams work usually better with my skin but still it was impossible to find a soap or cream that would give me consistent good results; good shave, minimal nicks, no burns and redness at each shave as I always go for a BBS.

This was until I came across Monsavon. My barber in Switzerland was using Monsavon to shave his customers. He advised me to buy a tub and try it out. I would call this soap a croap, between a soap and a cream. It's basically a really soft soap making it easy to load on the brush and lather (I face lather).

I don't like the sent but all rest is amazing. Easy to lather, thick and it consistently gives me a great shave with minimal razor burn or anything, considering I go for a BBS every time. Its my go to soap and it became for a while my only soap because of the consistent good results. Since, I've tried other creams that lather really well, used by professional barbers but still, I don't get as good results as Monsavon and it is the cheapest soap I own so for. So, if you are in a french grocery store at any time absolutely get it, you won't be disappointed.

Pros: $1.78!
Cons: Cheap, thin plastic bowl
I vacationed in Sint Maarten last week. My wife wanted to go grocery shopping on the French side of the island so we stopped at the Super U in Marigot, where I first spotted Monsavan Bol a Raser. I had never heard of it before, but for that price how could I not pick one up to experiment with? It's a vacation, you have to try new things!
While I was on the island I was using an Edwin Jagger 87 (that's a safety bar razor) with Feather blades and a very cheap, pedestrian boar hair brush. It's my second-string set up, I am on vacation and don't worry too much about close shaves when I am on the beach all day. But when I used Monsavan I was pleasantly surprised by the voluminous lather, the closeness of the shave, and how my skin felt afterward. My wife said it smelled like Irish Spring or Listerine, with some lavender thrown in. She gave it the thumbs up and I was impressed enough by it that I dropped by the Super U to pick up two more.
When I got back to the States and my usual, first-string set up - Fatip Piccolo (open comb) with an Astra and my Tweezerman badger hair brush - holy crap it was quite possibly the best shave of my life! My wife was amazed at how my skin felt and how close the shave was.
I am loving this cream right now! Normally I am a Proraso Green guy, but I am sticking with Monsavan for the foreseeable future. The skin of my face has noticed the difference in the past week.
My only "con" is the fact the tub is extremely cheap and thin plastic. Proraso has stronger plastic and the top snaps onto the tub; Monsavan has cheaper, thin plastic and the top just sits on the bowl - it's a fairly tight fit, but I made sure I used a rubber band to keep it closed when I put the tub I was using in my shaving kit for the flight home.
The smell? Whatever, to each their own. It smells good enough to me, and it becomes milder after washing everything off and using my alum block. And as I said above, if the wife is fine with it, I'm fine with it.
For less than $2 it is a must buy, you have to try this out. I would probably pay up to $10 for this in the States without blinking an eye. For more than $10, I would probably pause. Maybe another, more available tallow cream would be a better option.
But I encourage you to go to France or the French West Indies to pick this up, there are lots of these just sitting on the shelves and they are so cheap!

Pros: Very cheap, and good performance and a nice scent
Cons: None
Introduction

At the beginning of this month I visited Paris for one weekend and next to the sightseeing I also planned to buy some shaving stuff that is only sold in France.

The plastic bowl where the shaving soaps comes into looks very simple and kinda boring.
It doesn't even contain the brand name on it, it says only in France "Bol a raser and Authentique" which means shaving soap and authentic and it tells the weight of the shaving soap inside. 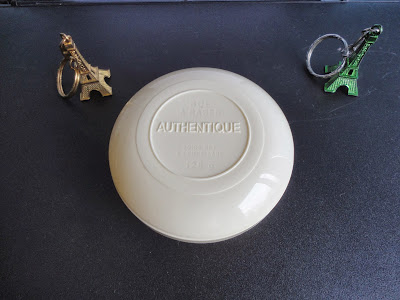 Mine first impression off the scent was a strong parfum smell which I couldn't really give a place.
But when I smelled again I could smell lavender and it doesn't smell bad at all to be honest.

I had mine Balea Men pure badger shaving brush soaking in warm water while I was taking mine shower.

After I finished mine shower I started mine shave with the Monsavon shaving soap. I found the quality of the lather really very good and to be honest I'm not able to write anything bad about it. 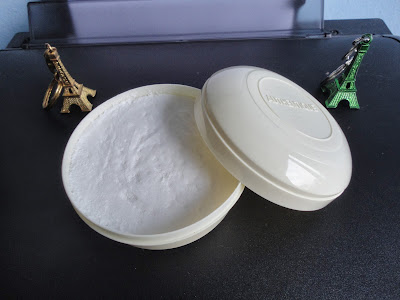 The lather is very slick and protects the skins good and also the shave was very good and I have to say this is just the way it should be.

I only estimate that this shaving soap will not last a long time, but that doesn't really matter as its really cheap if you can get it in France, but if you looking for a soap that lasts long then Monsavon is probably going dissapoint you.

I find the smell during the shave really relaxing and not overpowering at all. I think the smell from this shaving soap is comparable with Speick shaving cream/soap which also smells like lavender.

For those who want to know it, I used an Edwin Jagger DE89L safety razor and a Gillette bleu extra de blade.