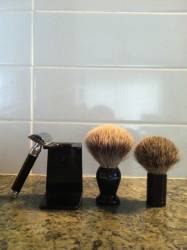 Disclaimers: Firstly, this brush was given to me free by Sam for the purposes of testing and reviewing. Secondly, my lathering technique is the one described here (http://badgerandblade.com/vb/showthread.php/21136), except that I use cold water in all steps, so my comments about lathering etc need to be taken with that in mind.

Initial Impression:
When I saw the pictures of this brush on the store page (http://www.shave-shack.com.au/index.php?act=viewProd&amp;productId=183) I was didn’t like the look of the aluminium handle; I thought it looked tinny, and to me the whole idea of ‘shaving like your grandad’ really invokes images of beautifully turned traditional wooden handles etc, and being a history teacher I really enjoy that nostalgic aspect of wet shaving. Having said that, when I actually got the brush I changed my mind – to a degree. I got mine in black and it actually doesn’t look out of place in my bathroom next to my black EJ Best Badger and DE86, and it’s quite weighty in your hand which gives it a good solid feel. It’s quite small, and you can see it on the right of my EJ in the pic above, both in overall size and brush diameter, but I imagine the brush will flare out a little with use. The handle feels a little small for my taste, so I’m not sure how it’ll go with use, but I’ll find out tomorrow!

First Use:
I used the brush for the first time this morning with MWF soap and it performed quite well. The hair didn’t seem to retain as much water as I’m used to, maybe because it’s Pure Badger and/or because of its smaller size, so it felt a little dry while loading it with soap, but I still seemed to get enough to produce a good lather. I was actually very impressed with the lather it built; it seemed to require very little effort. On the downside, because of its size, it didn’t hold much lather, just enough to totally cover my face for the first pass. For my second pass, I had to go back to the bowl twice. This isn’t really a big deal, just a tiny annoyance. I was quite disappointed with the face feel of the brush as it was very prickly. I’ve not used a Pure Badger brush before so don’t know if that level of prickliness is common to that type of hair or if this one was pricklier than most, but it certainly wasn’t as nice as my usual brush. I’m not sure how much it is going to bother me as I keep using it, and as the brush softens with use, but at the moment it’s unpleasant. Two other minor things: firstly, I lost a lot of hair out of the brush with this first use, maybe up to a dozen, which is about all I’ve lost from my EJ in the six months I’ve had it, so I’m not sure yet what that says about the build quality of the brush – I’ll just have to see if that continues. Secondly, I found the small handle size to be less comfortable to use than the larger handle I’m used to, but that’s probably something I’ll get used to fairly quickly. So far, though, it’s proving to be a very decent brush.

One Week Later:
I’ve used the Modal 18 each day this week and it’s performed much the same as it did that first day. It does a great job lathering my MWF, but the feel of it in my hand is still a bit too small, almost cramped. I’ve lost only another few hairs, so I’m happy with the build quality, but the scratchiness of the hair is still annoying, especially when lathering for the second pass over skin that is already a little sensitive from the first pass. I went back to my EJ brush this morning for comparison and found that it was definitely a lot softer on the skin, and the larger handle allowed for a better feel of the lathering process, but the lather wasn’t quite as thick as with the Modal 18. (I used exactly the same lathering method and ratio of water etc.) MWF is a hard soap, so perhaps the harder bristles on the Pure Badger allowed me to load a larger quantity of soap? Might be worth trying if you’ve had trouble building a good lather from MWF in the past. (Anyone tried using a Silvertip brush with a hard soap like MWF?) Is the scratchiness enough to put me off this brush? I don’t think so; I’m sure I’d get used to it after using it for a while, but as someone who got into wet shaving because of sensitive skin, I’m especially conscious of it. I’m planning to use it for another week with my GFT Sandalwood soap to see how the harder bristles go with a softer soap.

Two Weeks Use:
I’ve used the Modal 18 each day this week with my GFT Sandalwood and it performed very well. It charged with more soap than my EJ as the GFT is a softer soap, but a little extra water, or a little less charging, and it made a very good lather, and I think I’ve gotten used to the small feel of the brush in my hand. I did go back to the EJ this morning for my comparison, and it was quite noticeable how soft the Best Badger felt compared to the Pure.

Three Weeks Use:
I spent this final week of the review using the MWF again, as that’s my primary soap at the moment, and it performed as well as it did the first week.

Final Thoughts:
Having used the Modal 18 for three weeks now I think it’s probably settled pretty well as it’s not losing any more hairs and the brush has bloomed a little, so it’s time for some final notes. I really like this brush: it lathered really well, and the weight of the metal handle gives it a good solid feel. It does feel a little small in my hand, but that’s something I’ve largely gotten used to over the weeks, and it probably only feels that way because I’m used to the much larger handle on my EJ. There are, however, two things that are going to prevent me from making it my everyday brush. Firstly, the feel of the Pure Badger bristles, especially when lathering for the second pass, are a little uncomfortable. It’s possible that if I’d started with this brush I wouldn’t even notice, but as I’ve been spoilt by beginning wet shaving using Best Badger I can’t help but notice the difference, and having sensitive skin makes me overly alert to it. (Over the last few weeks I’ve done a little reading on the differences between Pure and Best Badger and this seems to be a good example of the style.) Secondly, the metal handle – I just didn’t enjoy holding metal as much. This is really a minor point, as it has nothing to do with the functionality of the brush, but aesthetics do play a role in the overall enjoyment of the shaving ritual, right?
In the end, would I recommend this brush? Definitely. At AUD $40 it would make a great entry level brush for those considering wet shaving, or a great second/travel brush for the more experienced shaver – not to mention the fact that it’s actually made in Australia! For me, this brush will find a home in my travel kit, as its smaller size makes it ideal for packing into my toiletries bag, and I have a fair bit of business travel planned this year so it will certainly come in handy!

My thanks to Alenka and Sam for allowing me to test drive their brush!