This soap was a real disappointment to me. I like the idea of mass produced shaving soaps, like Williams or Van der Hagen/Surrey & Tabac, among a handful of others, because it legitimizes my particular insanity (I mean, heck, if they sell shaving soap at Walgreens, can I be all that crazy?). Master is not sold in stores, as far as I know, but is distributed to barbers and other professionals through barber supply and beauty stores and websites. Among the venerable Master Chemical Company's other products, we find a number of excellent aftershaves. So, I thought, maybe their soap would be a sort of "sleeper" -- an excellent soap that has quietly been produced for eons in some old brick factory in Illinois, where boilersuit clad "Master Men" have expertly toiled for decades, shunning trade union interference and passing their tenured jobs down to their first born sons, and.... well you get the idea

But it was not to be. The first sign was that my puck of Master, purchased from Appleton Barber Supply for a little north of a buck-a-puck, smelled exactly like a urinal disinfectant puck (I worked as a janitor in High School, so I know). The scent is meant to be "lilac," but so is the scent of urinal pucks and other industrial disinfectants, almost all of which have the nauseating blend of lilac an naptha (the stuff mothballs are made of). As with Pinaud's Lilac Vegetal, in this case a little lilac goes more than a long way...

Nonetheless, the industrial beauty of the puck, embossed with the venerable Master Chemical Co. logo, impressed me, so Master gets high marks for the non-existent "puck presentation" category: 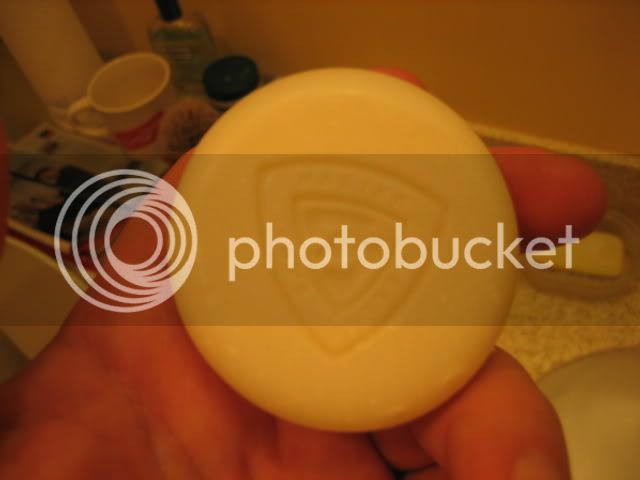 Holding my nose, I decided to give this soap a whirl, still harboring unreasonably high expectations. I tend to shake my brush fairly dry before I charge it with a soap, but the Master, comfortably housed in the Marvy rubber mug, still managed to produce a rather soupy proto-lather: 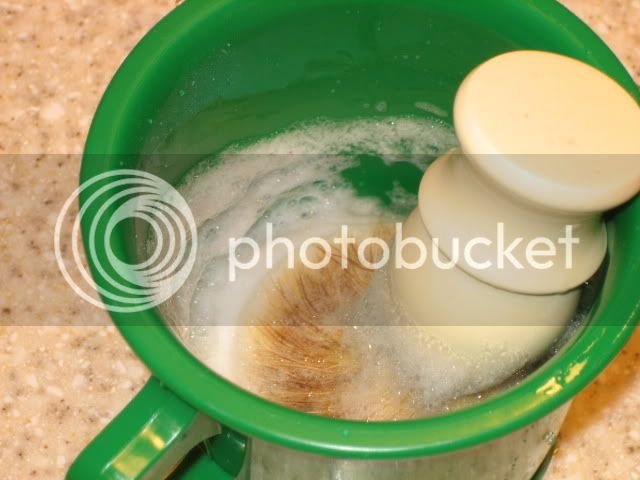 Still, I soldiered on, but the brush would not be adequately charged: 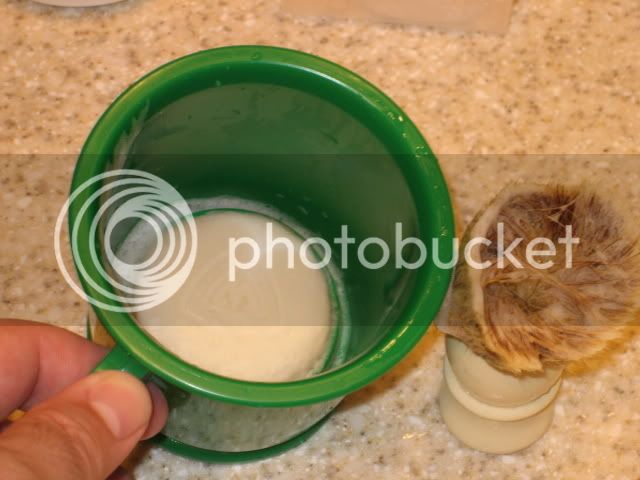 Half-heartedly, I went for the obligatory lather-on-hand picture. At first the lather looked OK, though thin. But by the time I picked up the camera to take a picture, it began to disappear: 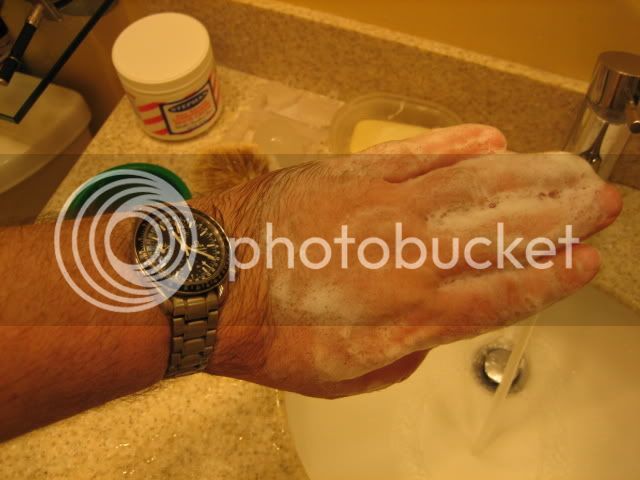 Things went downhill from here. The lather fared no better on my face than it did on my hand, and while the soap had some lubricative qualities, it was not efficacious enough to overcome the vile scent and the disappearing lather. I have not used this since, but I have attempted to lather it several times just to be fair, even using different brushes -- always with the same thin, disappearing result. To make matters worse, the scent precludes this puck from being used a shower or hand soap. I am sad

These come by 8 pucks of 2 oz in a carton and are meant for barbers / professional use. As I mainly use professional stuff, I was interested. The Williams method (water on top of the puck) seems to work. With a horse brush and a boar brush I could get a lot of lather out of it. Not as creamy as some other soaps, but good enough. Efficacy is good, the razor glides well, no irritation and a close shave. The scent (lilac vegetol, whatever that may be) is new to me. Not bad. It lingers for quite a while, most of the day even. But nothing strong, just a faint smell. Resembles Classic Fern most. My skin feels good after the shave, soft. Nice, worth a try. But probably best with horse or boar brush, after all it is professional stuff.

I'd been wanting to try this soap for a while, so I picked up a sleeve of pucks online.

I've been using the soap for several weeks now with a great deal of success. I've found that the key (for me, at least) to getting a great shave out of Master's involves several key principles:

1. Use extremely hot water: we have one of those "instant hot water" spigots on our kitchen sink and this comes in handy for filling my mug.
2. Use a boar brush: I've been using the VDH brush but I'd like to experiment with one of my Omega boars. I think badger bristles are just too soft to get the most out of the soap; they're just not scrubby enough.
3. Soak the soap and brush for a while in the mug: I usually submerge the lot while I take a shower.

I've found that I get good, slick lather that gives a great shave (currently using a Feather in a Slim adjustable.)

The only criticism I have is that the soap residue tends to clog up the razor a little. However, a few vigorous swirls in the sink clears the gunk out.

For me, you can't really beat the nostalgia factor of this soap. It's cheap and has a nice lilac vegetol smell.

Again though, to echo MAK, YMMV.

I read with interest Zachster’s review of Master Shaving Soap.

When I returned to the brush and puck after a 30 year absence I had no idea what to buy. The items that I found on a barber supply website were purchased more on cost rather than anything else. My first setup consisted of an Omega boar brush, a green rubber mug and an eight pack of Master Shave all at a very low price.

I used Master Shave for a long time with good results until I developed a severe case of AD and started buying some of those “high end” products. Reading the above review I wondered, “Could I have been so off?” I decided to revisit Master Shave and scientifically document my findings in my own personal laboratory (OK, my bathroom).
My goal was to see if my favorable memories of this product were based on fact or fantasy. Therefore, I used my original shaving gear.

Presentation: really not bad for a product that sells for a bit more than a buck a puck. The pucks themselves are creamy white and embossed with a “Master Shave” emblem. The have a pleasing curvy shape and they are individually wrapped. All 8 of them are stored in a sturdy cardboard tube.

Fragrance: the idea that we attached fragrances to past memories is fascinating to me.
In fact I did a separate post on the topic:
http://badgerandblade.com/vb/showthread.php?t=58026
The fragrance of MS reminds me of a soap that my mother would occasionally buy “in the day.” To me it smells clean and old fashioned. Not a fantastic smell, sort of commercial but fine just the same.

Latherability: here again my experience is greatly different from Zachster’s. I think that this may be in part due to the fact that I used my old boar brush with its harder bristles. It also may be that my water is softer than his. Anyway, it was easy to produce mounds of lather. The lather was lighter than a premium cream but it covered my face just fine. Attached are some pictures of the “lathering experiment.”

The stuff was pretty slick and my shave was smooth without any razor burn or nicks.

Moisturizing: don’t expect the same results as what you would get with the 3Ts but the moisturizing wasn’t terrible. My face was neither dry nor pulled, it was soft. Therefore, there must be some kind of moisturizer in it.

I have come to realize that this shaving soap is not intended for end users. It is a professional product for barbers who likely use boar brushes. MS gives them decent lubrication and an old-timey barber shop scent at a very low cost per shave.

Which end users would be interested in MS?? Those who are into wet shaving mostly for the economy.