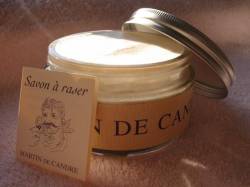 Pros: Lather, Scent, Value
Cons: Pricey
Ahh, Martin de Candre. Probably my favorite shaving soap. Produced by an artisanal soapmaker in the heart of the Loire Valley of France, MdC is in many ways what a good shaving soap should aspire to be.

Price: Well, let's get this out of the way, because there is no way around it: Martin de Candre is expensive stuff. If you buy direct from the manufacturer's website, it'll run you just shy of €40; I bought mine for €45 in one of the large department stores here in Paris and that seemed slightly on the high side. It's mainly sold in the glass bowl with 200g of soap; there's also a 230g wooden bowl available for €59, but in that case you're clearly paying a premium for the (admittedly very nice) turned Beechwood bowl and not the extra 30g of soap. There's also a 50g travel-size pot for maybe €20 or so.

"But Croulebarbe," you exclaim, "you marked it an eight for price! How can this be?" Well, here's the thing: yes, it's expensive, but you get your money's worth. At five to six shaves a week, my last bowl lasted me just shy of a year and a half. In terms of cost per shave, that's pretty damned good.

So I knocked off two points because the up-front cost is quite high (sixty bucks for a jar of soap is a lot of money in any man's English), but you do get your money's worth.

Quality: The presentation is excellent: clean, simple, unpretentious. The soap is filled into a heavy glass jar (all the way up to the rim!) with an aluminum screw-top lid and brown Kraft paper labels, which is packaged in a white carton. The jar in particular is quite handsome and would be well at home on display in one's bathroom - it has a very masculine style to it.

Once emptied it makes an excellent repository for other soaps, grated pucks, etc. I soaked the labels off of the last one, washed out the residue, and grated a puck of AoS tallow soap that I had been given as a gift.

Scent: I marked this one relatively low because I know that it's a rather polarizing scent. The overall nose is very strongly lavender and mint, with undertones of rosemary and very, very, very faint notes of herbs and maybe citrus oils. I personally like it very much, but it is admittedly somewhat medicinal in nature. It must be said, however, that it is much less strong on the face than it is in the bowl.

The scent is much more potent when the soap is new; once you get into the heart of the soap it seems to mellow a bit and gain complexity, but without diminishing in intensity. There is also an unscented version.

Lather jumps off of the brush with very little effort. I use the soap primarily as a face-latherer, so my experience is generally limited to that, but the brush needs not be terribly wet, nor do you need to slowly add water as you build the lather as with many soaps. It merely suffices to swirl a loaded brush over a moistened face and the lather will build.

The lather comes out nicely dense and gives good cushioning to the blade. Not much more needs to be said about this.

The lather lasts quite long without significantly thinning or dissipating, and with a normal load on the brush you should easily be able to create enough for a three-pass shave.

Another thing: unlike many soaps, Martin de Candre works marvelously with hard water. As a general rule the water in France ranges from quite hard to very hard, so one would expect no less from a French savonnier.

Efficacy: Excellent. MdC gives a nice, slick, well-cushioned shave. It offers an excellent degree of protection; I relish the close, nick-free shaves I get when I use the stuff.

Moreover, you don't need a whole lot of the stuff on your brush; while it's not quite to the degree of a cream or a soft soap like Proraso, you don't need to scrub the brush into it to get a sufficient load like many other hard soaps. Just a few swirls, and you're off. As I said above, you won't use this stuff up very quickly.

Moisturizing: Very good, but not superlative. Your skin will feel much better than before you shaved, but it won't make you throw away your post-shave products. Still, for a soap I consider it to be very good.

Overall I highly recommend this soap, because at the end of the day it's about the shave, and in every category pertaining thereto Martin de Candre delivers admirably. Of course, if you're unsure about the scent, I would check it out at the store first, or start with the travel-sized pot to limit the damage if you find it's not to your liking, or alternately get the unscented version, but in any case you owe it to yourself to give it a try.

DesB
I have two tubs of Martin de Candre (Fougere and Original) and just haven't been able to find anything better. Easy to work with and lots of slick foam. I had to give away all my other soaps as I found them to be inferior and I just cannot find another one as good as MdC just to provide some variety.
Most efficient soap I have used to this point. With very little loading the lather explodes from the brush. MdC gives a very close nick-free shave and leaves my face feeling well moisturized for a non-tallow soap. It is quite expensive up front and I didn't love the scent but it makes for such a nice shave that I feel its worth it. IMO it's MdC and MWF are in a league of their own.

Pros: Scent, Packaging, Performance
Cons: None
By far the most luxurious product I own in skin care and/or shaving, but well worth it.A little goes a long way and the tub is 170g (I purchased the Scented Glass Jar version). Scent is unique, but apparently a very raw lavender scent, not artificial, it grows on you. I love it.Easy to lather, great shaves, super fast shipping direct from MdC and the best packaging I have ever seen. Free samples too!