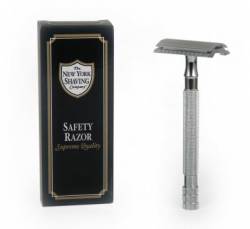 Pros: Shave quality, ease of use
The Mariner LH handle is quite long and solid feeling. It has a pleasant heft and nice balance. The chrome finish is nicely done and the texturing makes for an excellent grip.
It shaves very well. The razor has a solid feel to it, and it gives very good audible feedback. During my testing, everything regarding my prep, soap/cream, brush, water temperature, pressure (none) and angle were my standard routine, which I always rely on for testing new products
The Mariner’s blade exposure is significant but not alarming. From an end view, the blade is held relatively flat with a less-pronounced arch. The blade’s positioning relative to the safety bar tells why it has developed a growing reputation as aggressive--it appears that the blade extends past the plane between top-cap and safety bar, like the chisel of a carpenter's plane extends below its face.
Is this razor aggressive? Yes. How aggressive? Almost like the R41, or an adjustable on one of the highest settings.
I find that I associated this razor with two, solid metal-handled Ever-Ready lather catchers in my collection. They are 100 years old and still have steampunk appeal about them. The Mariner shares their industrial-era charm.
I have to say I like this razor. BBS at the end. I even tested for irritation in the same way I usually do (Booster's aftershave followed by Tabac cologne). No irritation. None at all.
The Mariner is easy to use and very effective, IMO. It's solid and substantial in my hands and feels very natural. The resulting shave quality is top-notch.
In trying to sort out why I like this razor so much, it came to me that it feels solid and natural in my hands and I can relax and use it naturally. I don't have to think about being careful, or compensating for a design characteristic like the domed head of a Fatboy. It's not the fanciest razor I own, but it's one of the very best shavers, for me, that I've ever come across.
The R41 is my all-time favorite. No doubt about that. It gives me the best shaves I’ve ever gotten, but it requires vigilance. The Mariner’s shave is very, very close the R41, IMO, and never gives me any problem. I can relax and use it easily and naturally. The Mariner does not seem to share the R41s negative effect on blade life.
That's it in a nutshell. The R41 may shaves closest, but gives me occasional irritation. The Mariner never irritates, shaves nearly as close, and does have a steampunk flare. The Mariner is definitely a "keeper."
Would I recommend this razor: [color=FF0000]YES[/color]