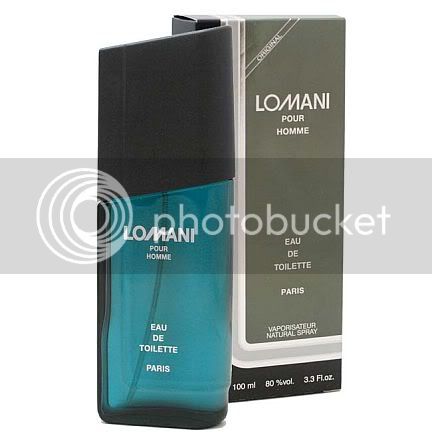 Lomani Pour Homme is one of those 23 year-old "fresh fougère" aromatic fragrances that makes me awfully suspicious. My misgivings are about a certain assumption that has been made in serious fragrance communities like Basenotes, and is one that I myself was guilty of - until I tried Lomani.

The supposal in question is that Pierre Bourdon, famous for creating Davidoff's Cool Water, based that formulation on an earlier (uncredited) work of his, Green Irish Tweed. This seems to fit. Cool Water shares many similar elements of GIT and doesn't come across as a blatant copy of anything else.

And Lomani is an even better copy of Cool Water than Cool Water is of GIT. Making matters trickier for me, I notice that Lomani was released a year before Cool Water, which means it really couldn't have been a Davidoff rip-off. Looking at the notes pyramid, I see almost identical structures of the same five notes, which I noted in red. Cedar is inaccurately excluded from the notes list on Basenotes, but accurately included in the list on Fragrantica.com http://www.fragrantica.com/


Now take a look at the Basenotes pyramid for Green Irish Tweed:

See what I mean?

This is intriguing because unlike Green Irish Tweed, Lomani is not widely known, at least not here in America. In 1987 Lomani was a Parisian men's release with little fanfare and not much acclaim. But like Cool Water, the fragrance opens with a slightly-aquatic, slightly-floral, vaguely oakmossy burst of clean freshness. There is a very distinct but light lemon, tempered from becoming furniture polish with a hint of sweet and authentic tangerine. Both notes (and all notes) are ridiculously well-rendered for a fragrance at this price point ($12 for a 3.3 oz bottle). The olfactory illusion of both citruses is one of a sheer lime accord. Which is certainly not something that one finds in Cool Water.

That's where the stark differences end. In Lomani, as in Cool Water, a ghostly lavender surfaces, bolstered by coriander, juniper, and a not-so-'80s version of oakmoss. Although juniper is not something noted in Cool Water, the difference it makes here is negligible. Lomani dries down to its amber and cedar base very nicely. The cedar is more prominent, and is a light, natural cedar.

Cool Water isn't really my type of fragrance, but I don't hate it, and did go through a small bottle recently. Lomani, by association, is not really my kind of fragrance either, but I do like it better than Cool Water for its citrus, its bolder and more natural rendition of lavender, and its beautiful juniper and cedar. I'll use this review to posit a new theory, one that challenges the bedrock of Bourdon's Cool Water as a stripped-down GIT. I say Cool Water is really a beefed-up Lomani. There's no doubt in my mind about it. And it makes more sense, too. Lomani is French - so is Bourdon. (Creed is pseudo-French, as it has its roots in Britain). I don't know if Bourdon had anything to do with Lomani, but if so, it would also follow that he would take the underdog formula and pitch an improved version to a larger company like Davidoff, where it would ultimately sell out. Whoever formulated Lomani must have at least inspired Bourdon, and he may have enjoyed Lomani and wanted to improve upon it.

Whatever the case, this is a very nice fragrance, and is dirt cheap. The scent is attractive and well done. Longevity is good. I get about six hours out of it. The packaging is a little misleading - it looks like something from 1982, not '87. The sleek bottle and huge black cap are definitely retro. Also the atomizer is a bulky stainless steel button that has "made in Taiwan" written all over it (figuratively, not literally). It does work very well though, and dispenses a very generous amount of juice per spritz - which is fitting with this fragrance because overall it's pretty light.

If you like fresh fougères, Lomani is one you should try. For my money, it blows Cool Water out of the water. Pardon the pun.