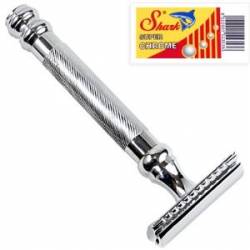 Loading…
Pros: Long balanced Handle
I have been using and EJ DE89 almost exclusively for nearly 2 years loaded with a feather blade. After talking with a few knowledgable folks here on B&B I realized I may be using to aggressive of a blade with a razor that has little feedback (EJ) causing excessive passes resulting in daily burn and nicks.

I ordered the Parker 99R from amazon with 5 shark blades and have been blown away at the difference. The razor is extremely well constructed, especially for its price point and looks beautiful. The grip is great even with wet/soapy hands and I feel no slipping as I traverse my face.

To date I have only shaved with this razor and blade set up 4 times but have noticed literally a 180 difference. Switching to wet shaving from disposable cartridges was a big improvement but finding this set up has changed the game for me. Granted, this review is extremely subjective due to my skin type and shave preferences but for the price, quality and shave delivered this is a must own. Highly recommend to all!

Pros: Long Heavy Handle
The Parker 99R was my first TTO (since I was 12) and my return to DE Shaving. I'd been using a straight razor and overpriced mega bladed disposables until about a year ago. Since I was coming from using a straight I didn't know how to rate the aggressiveness at first. After using it, and comparing it to the now 12 other DE's I now own, I can make an educated assessment. The 99R has been rated as a beginners DE razor but I have to disagree with how it's been placed. The 99R is fairly aggressive and give a great shave and I actually wouldn't recommend this razor to a beginner. This is a heavy razor, which I like but and the weight is more in the handle but still well balanced. A beginner may have a tendency to use too much force and cause themselves a bit of irritation or even nicks. That being said, by using the weight of the razor and proper preparation you will get an amazing shave without irritation or bloodshed. I tried the Sharks it came with and found that for my beard they just didn't do the trick so I've switched to the Feathers and they are crazy sharp so I use them in all of my DE's.

The only thing that would make this a beginners DE is the fact that it is a TTO (not that all TTO's are for beginners just easier to use), the price is getting into the realm of a quality razor which it is. I have to add that this is one of my favorite looking razors, its very shiny and elegantly styled (similar to my Merkur 38C, which I love) but I have since upgraded, it a sickness really, and haven't use it in several months. I would how ever recommend it to anyone looking for a quality product at a fair price. IMO beginner razors are Weishi and that Pawn Star guys razor which are the same thing.

A great razor. Big, hefty, but well balanced. By far the "sexiest" razor I've seen - which is why I had to have it. The barber shop pole handle is beautiful and matching it with a TTO head is awesome. Finish is flawless but the TTO butterfly wings close just a tiny bit unevenly, though this does not affect performance. Overall, not quite as aggressive as the Merkur 23C I started with, and actually this razor seems pretty mild. This means maybe an extra pass for BBS which can lead to some irritation if I'm not careful. All in all a very beautiful and well made razor that functions fine.