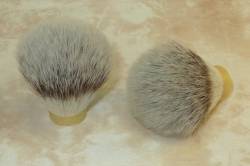 Photo and description courtesy of www.thegoldennib.com

Pros: It's a lather machine
Cons: Doesn't dry as fast as expected
Price: At $15.95 plus shipping, it’s cheaper than a silvertip knot, but definitely not the cheapest knot out there. After having used the knot, I’m very satisfied with the purchase.
Quality: The build on this knot is excellent. It mounted into the brush handle with ease, fit snugly, as expected. It’s dropped three bristles since I started using it, but I’m pretty rough on brushes, so I’m actually calling that a good sign. Others have said theirs didn’t drop a single bristle, so that’s why I docked a point here.
Density: This knot is extremely dense. Gripping it toward the base of the knot yields exactly no play. It feels rather solid up to about 3/8 – 1/2 inch above the base where the bristles narrow and splay. I bought this knot because other reviews of smaller knots of the same make stated they dry very quickly, but with the density of the bristles on the 24mm knot, I can thoroughly shake out the brush, the way you would shake out a mercury thermometer, and put it in the stand. The next morning it’s still damp. It dries slower than all of my other brushes. I’d say that’s on account of density, since the bristles don’t actually absorb water.
Stiffness of Tips: I rate it medium-high on the stiffness scale. It’s rather comparable in backbone to my B&B Essential brush. It’s probably slightly less rigid, but still a very nice firmness to it.
Softness of Tips: It’s an interesting feeling. You can feel each of the bristles on your skin, yet they give so easily at the tips. It feels pillow soft on the skin, no scritch whatsoever, no irritation. I head and face lather, and it’s always a treat.
Ergonomic: I have to give a 10 here, it’s as ergonomic as whatever handle you put it in.
Latherability: This is where this brush really shines, less a little quirk here or there. The bristles don’t absorb anything, they just hold whatever you put in there. It takes less product to get the job done with this brush. I can load up with Taconic Shave or KMF creams and it’ll put out lather for 5 or 6 passes on what I normally put in my badger brush to get 3 passes. I can load up with any given soap as I would with my badger and get an extra pass or two out of the load. This is nice being I shave my whole head. I have to admit though, that I don’t know how to load less soap. I only know how to load the brush properly. So if you’re using soaps, unless you know something I don’t, you won’t see any economy out of the purchase. But if you use creams, try a peanut size drop instead of an almond and see how far it gets you. I bet you can get your three passes out of it.
Quirks: It’s nylon bristle, so it’s springy. I inadvertently flicked little droplets of soap on my wife while loading the brush. She was a few feet away, but still felt it. And I tend to pepper the counters and mirror with little droplets that get flung off as the bristles spring free at the end of a stroke. I end up wiping the counters and mirror down at the end of the shave anyway, so it doesn’t really matter for me, but something for you to consider.
Overall: It’s a really great knot for the price. It’s very soft tipped, and dense, and firm enough to excel with anything you want to use it with, from triple milled to liquid creams. Depending on your product, it can seem like it won’t ever stop giving up lather. If you’re looking for a synthetic for any reason other than travel, I would definitely give this one a go. It’s a gem. However, if you’re looking for a quick drying knot for travel, keep looking, you haven’t found it here. It holds onto water like a camel.